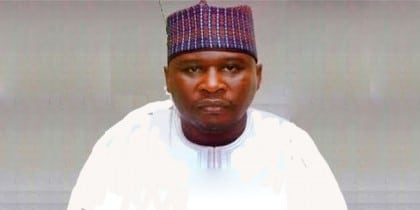 Wilson Uwujaren, Abuja; Trial of a former governor of Adamawa State, Ahmadu Fintiri, got underway on Thursday January 26, 2017 before Justice A. R. Mohammed of the Federal High Court sitting in Maitama, Abuja with the Economic and Financial Crimes Commission EFCC presenting its first witness, Ibrahim Andrew.
Fintiri, who was also a member of the Adamawa State House of Assembly, is facing a 5-count charge of money laundering.
He was arraigned on June 30, 2016 alongside Mayim Construction and Properties Limited, for allegedly laundering monies to the tune of N2.9billion through his naira and dollar accounts domiciled at Ecobank Plc., as well as making a large cash payment for the purchase of a property at Plot Number 7, Gana Street, Maitama, Abuja when he held sway as the acting governor of the State.
The offence is in contravention of Section 15(2)(a) of the Money laundering (Prohibition) Act, 2011 as amended in 2012 and punishable under Section 15(3) and (4) of the same Act.
Andrew, while being led in evidence by counsel to the EFCC, Larry P. Aso,
told the court that, when he was appointed Secretary to the State Government, he requested for briefing from various ministries and their responses showed that state funds running billions of naira were misappropriated.
He also explained how the defendant (Fintiri) during the press briefing as the acting Governor claimed to have received N21billon in the 86 days he spent in office.
The witness went further to explain how the defendant also claimed to have spent N2.8billion  on projects, mainly in Malamre ward in Jimeta Local Government Area which was under attack by the insurgency at that time.
On the transaction of N475million, which was meant for the construction of Faculty of LAW at the Adamawa State University, the witness said that there was no construction adding that only the foundation was laid.
Two documents were tendered as exhibits.
Though, the defense counsel, M. A. Magaji, SAN, objected its admissibility, his objection was overruled and the documents were admitted as exhibit A and B.
The case has been adjourned to March 2, 2017 for the continuation of trial.

NEWER POSTWe Will Do All We Can To Support Local Producers&Manufacturers ~ AG. President Osinbajo
OLDER POSTCourt Orders Forfeiture of Malabu Oil Block