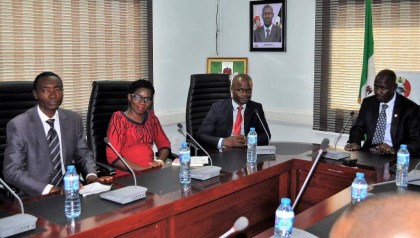 Ibrahim Magu, Acting Chairman of the Economic and Financial Crimes Commission, EFCC, has identified corruption as a challenge that must be seriously tackled for the ongoing rehabilitation process in nation’s prisons to be successful.
Magu made this known on Thursday, January 26, 2017 while receiving a group from Centre for Prisons Reforms and Inmates Rights, CPRIR, led by its co-ordinator, Isowo Smart, who were at the EFCC’s Head Office, Abuja on a courtesy visit.
Magu assured the group of the Commission’s readiness to partner with the organisation in pushing through penal reforms to make life better for inmates.

The EFCC boss lamented the high number of people in prison which were mostly due to corruption.
“The high number of people in the prison is as a result of corruption and this poses a challenge in the rehabilitation process”, he said.
Speaking earlier, Smart stated that there was the need to partner with the EFCC as it was clear that, “contrary to some people’s perception, the

Commission is not a weapon for witch hunt but a credible platform for fighting corruption.
“We want to partner with you in the area of information sharing. We can assist in examining and training of suspects who are psychologically unstable for them to be able to face legal actions against them”, he added.
On the visit were the Public Relations Officer of the Organisation, Iyamba Angela, Finance Officer, Okereke Ukwa and members of EFCC management.