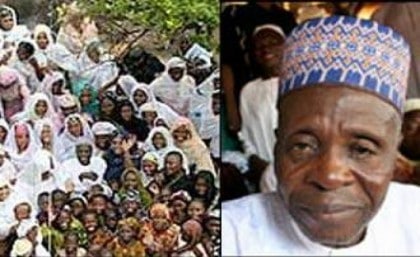 Bello Masaba, The Man With 89 Wives

Masaba died on Saturday, January 28, in his Bida residence during a brief illness. He was aged 93.

NAN reports that a large crowd joined in the prayers. Masaba was immediately buried at his residence.

The funeral prayer was attended by Alhaji Abdulmalik Ndayako, the  Shaba Nupe, the second in command in Nupe Kingdom, Alhaji Usman Ilata the  Kotun Nupe who is third  in command. Both represented the Emirate council.

Alhaji Nma Magana, a resident of Masaba palace described Masaba as a dedicated Muslim who promoted Islam in Nupe kingdom.

“He was a philanthropist, humble and committed to the preaching of Islam”, he said.

One of Masaba’s 180 children, Mahmood Bello Masaba described his father as a true Muslim who worked toward promoting Islam in Bida and beyond throughout his life.

“My father made us adherents of the principle of justice as enshrined in our religion”, he said.

Malam Ishak Yahaya Bello, Secretary to Mohammed Masaba, said “Baba warned us never to associate Allah with any evil thing but pray and abide by the teachings of the Holy Prophet Mohammad (SAW).

Alhaji Mohammed Tahir, Personal Assistant to Masaba said: “He was a godly man. Everybody in this town knows we have lost a very important person who left behind a legacy that all should emulate .

“He is a man of his words, he told us to surrender to the will of Almighty Allah and not to associate Allah with any other thing.”

“Masaba never in his life went to seek any medical attention in hospital. He did not use Western medicine either for himself or his followers. He believed in divine medication from Almighty Allah,”

Tahir dismissed media reports that Masaba slumped twice before being taken to hospital. NAN had reported that the man died at home.

Mohammed Bello Abubakar Masaba was survived by 89 wives, over 180 children and many grandchildren