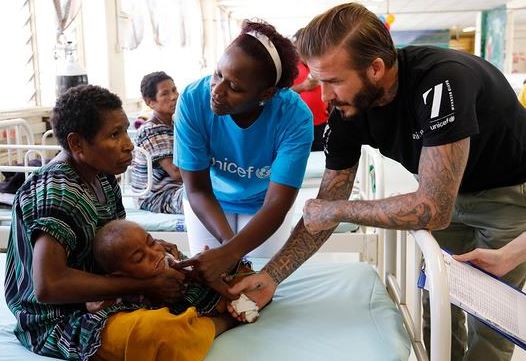 UNICEF’s Statement On Beckham: ‘Extremely Proud Of The Work He Has Done’

The allegations were revealed on Friday which included apparent quotes from David about his continued charity work with organisations including UNICEF, Elton John AIDS Foundation and the Malaria No More UK Leadership Council, as well as furious emails sent to his reps discussing disappointment after being overlooked for a knighthood from the British monarchy.

In the statement UNICEF said that they are ‘extremely proud’ of the work he has done with them and the 7 Fund, which David personally helped to set up.

‘David Beckham has been a UNICEF Goodwill Ambassador since 2005, and as well as generously giving his time, energy and support to help raise awareness and funds for UNICEF’s work for children, David has given significant funds personally.’

The charity adds that they work ‘in good faith’ with their high profile ambassadors, who ‘support UNICEF in a voluntary capacity, receiving no fee for their time and commitment’.

Allegations were revealed on Friday via Football Leaks, the sporting equivalent of Wiki Leaks, via leaked emails that David’s reps said were ‘doctored’.

‘This story is based on outdated material taken out of context from hacked and doctored private emails from a third party server and gives a deliberately inaccurate picture,’ a spokesperson for David Beckham told Metro.co.uk.

NEWER POSTReasons Why Nigerians Can Never Part With Ponmo
OLDER POSTEPL: Chelsea Move Up 12 Points In a 3-1 Win Over Arsenal