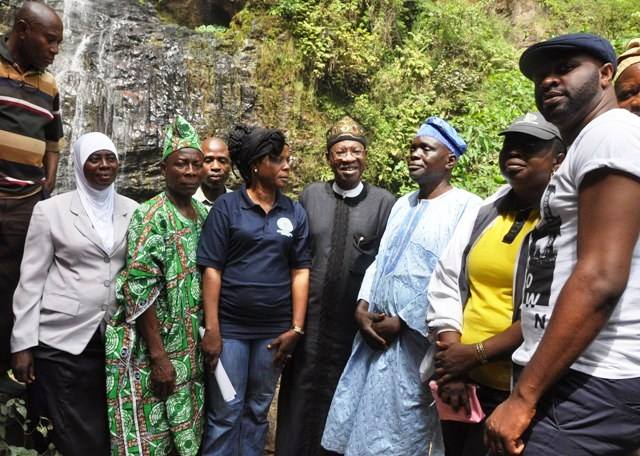 Segun Adeyemi, Kwara: The Minister of Information and Culture, Alhaji Lai Mohammed, kicked-started a tour of tourist sites in the country with a visit to the spectacular Owu Waterfall in Kwara State on Sunday.

The Minister, who was accompanied by representatives of the local community in which the Waterfall is located, officials of the Kwara State Ministry of Culture and Tourism as well as the media, described Owu Waterfall as one of the wonders of nature, saying the government is now looking toward natural assets like the waterfall with a view to developing them for economic benefits.

“We are all awed by the awesomeness nature of the Almighty. You can’t begin to wonder where is the source of this water and what I found most enticing and really baffling is the louder we shout, the more the volume of the waterfall.

This is one of those natural assets that we have been bestowed with and there is no country that has this kind of assets that will not be able to exploit it for economic benefit,” he said.

Alhaji Mohammed underscored the dearth of infrastructure as one of the major challenges confronting tourism development in Nigeria, but expressed optimism that the revitalization of the Presidential Council on Tourism (PCT) will bring about synergy within the government to surmount the challenge.

“Fortunately we have been very busy trying to revitalize the Presidential Council on Tourism because tourism is not a stand-alone ministry.

Without the cooperation of other ministries such as Power, Works and Housing – because you need to provide road, electricity and security – you cannot actually have a vibrant tourism industry.

I am happy I came here personally today and I have seen it and at the next meeting of the Steering Committee of the PCT, we will actually put this across,” he said.

The Minister promised to liaise with his counterpart in the Ministry of Power, Works and Housing to give priority to the construction of t0he 7-kilometer access road to the waterfall.

He also commended the Owa-Onire Community and the Kwara State Government for encouraging tourists to visit the Owu Waterfall through the facilitation of access and the provision of security.

The Tour Guide and a leader in the community, Mr. Akanbi Sunday, who chronicled the history of the Owu Waterfall, thanked Alhaji Mohammed for being the first-ever Minister of Information and Culture to visit the waterfall.

The Minister had earlier paid a courtesy visit to the Onire of Owa-Onire, Oba Abdulraham Fabiyi, telling the traditional ruler he was in the community to have a first-hand knowledge of the Owu Waterfall with a view to developing it as a viable tourist site, in line with the diversification policy of the Federal Government.