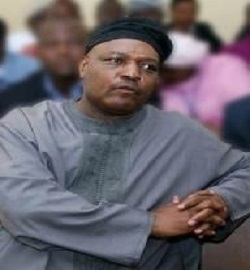 Jolly Nyame, a former governor of Taraba State, has been ordered by a Federal Capital Territory, FCT High Court, Gudu, to begin his defence on March 8, 2017 after Justice Adebukola Banjoko, on February 14, 2017 dismissed his application for a “no-case” submission.

Nyame, who is standing trial for a 41-count charge of criminal misappropriation of N1.64bn state funds, had on January 18, 2017 through his counsel, Charles Edosomwan, SAN, urged the court to “hold that the testimony of prosecution witnesses have been so damaged and can’t be relied on”, and “the crucial elements are missing in this case”.

At the resumed sitting today, the trial judge, citing Sections 302, 303, 357 and 358 of the Administration of Criminal Justice Act 2015 noted that, it was in order for a defendant to apply to the court for a “no-case” submission, but the “court shall have discretion whether essential elements of the offence have been proven or not”.
Court of Appeal Nullifies Impeachment Of Former Governor Murtala Nyako

Justice Banjoko, further noted that a prima facie case implies a ground for proceeding, “it doesn’t require proof beyond every reasonable doubt, as is required to find a defendant guilty or not”, and, “whether the prosecution has made some case requiring clarification from the defendant no matter how slight”.

“In relation to this court, having had a close look at the evidence and exhibits, I hold that this case requires him to provide information and give explanation with regards to evidence presented by the prosecution, and so he is ordered to enter into his defence in the interest of justice,” the trial judge held.