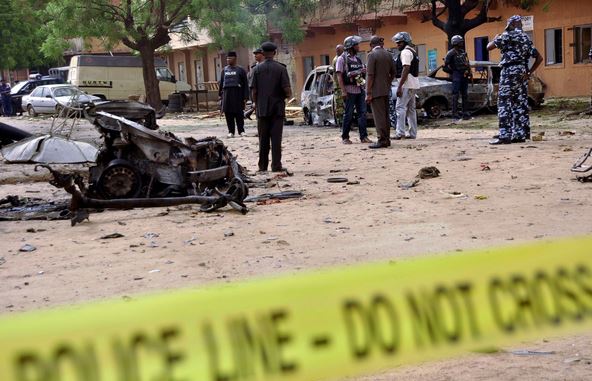 Nine  bombers died in Maiduguri between Thursday night and early Friday, in what would qualify as the boldest Suicide attack plan by Boko Haram to cause maximum damage in the Borno capital.

But the mission was a flop in human casualties. The major damage happened at Muna Garage, a truck station where 13 stationary  trucks were burnt after a bomber attacked.

While some reports said three suicide bombers struck at the station, the Borno Police Command said only one bomber attacked. The unofficial report said two persons died on the spot and six persons were injured.

The Borno Police Command said the suicide bomber detonated the explosive in the midst of 13 trucks along Maiduguri/ Mafa road leading to their destruction.

The spokesman of the command, Mr Victor Isuku said:

“On Thursday at about 2318 hrs, a suicide bomber sneaked into the midst of 13 pick-up trucks loaded with goods along Maiduguri/Mafa road, said to be awaiting departure to Gamboru Ngala in the early hours of Friday.

“He detonated an Improvised Explosive Devise (IED) strapped on his body,” Isuku said.

He, however, said that only the bomber was killed during the incident as the vehicles were empty.

“The resulting explosion razed down the parked vehicles beyond recognition.

“A police patrol team was promptly deployed to the scene to restore safety and normalcy,” the police spokesman said.

Other reports however quoted the police as saying that three female suicide bombers attacked the  truck station around midnight. And that the two civilians died there.

One witness, Ibrahim Ali, told Anadolu Agency: “We just heard the sound simultaneously from three points. The three bombers were torn apart by the explosions while two other persons died.

“Six people including the security volunteers [Civilian JTF] were injured.”

In the outskirt of Maiduguri witnesses and soldiers said  six suicide bombers were killed by soldiers as they  repelled a Boko Haram attack. The killing brought the suicide bombers killed to nine, in what is regarded as  the fiercest attack in months by Boko Haram on the city.

Six of the suicide bombers were killed when Nigerian  soldiers  fired at gunmen on motorcycles escorting the bombers, self-defense fighters said.

The six suicide bombers were  intercepted at a security point a few meters from the scene of the first blasts.

The Boko Haram group has renewed attacks in recent times, including firing on an Air Force helicopter on medical mission to Gwoza on Thursday.