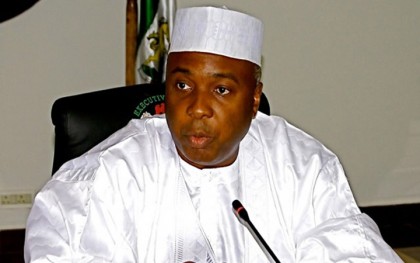 Senate President, Dr. Abubakar Bukola Saraki, on Saturday urged the Federal Government, States and Local governments to ensure efficiency in all healthcare facilities across the country for the benefit of the masses.

Saraki, according to a statement by his Chief Press Secretary, Sanni Onogu, made the call during the commissioning and handing over of an 80-bed hospital built by Senator Hassan Mohammed and donated to the Federal Government in Potiskum,  Yobe State.

The Senate President noted that with the hospital,  the residents of Potiskum will no longer need to travel to neighbouring states for treatment.

He said: “This is why I committed to helping Senator Mohammad with getting the support of the Federal Government in the running of this hospital so that its benefits to the people of Potiskum and Yobe at large, are guaranteed and sustained.

“This is the kind of leaders we find today in the Nigerian Senate; people who are abandoning the practice of yesterday’s politics. It must be strongly lauded that this is a PDP Senator, in an APC led state, donating this edifice to an APC government.

“The lesson is that what matters is not the political party or the government in power but the love you have for your people and your connection with them. I challenge the Federal Government to ensure that this hospital that has been entrusted to them is adequately taken care of, and is run with the highest level of professionalism and efficiency possible.

“I implore the Ministry of Health to ensure this Hospital continues to receive priority attention both in management and in resource. I expect that this hospital will be run with the highest degree of efficiency possible; and to the good people of Potiskum, I encourage you to use this hospital and demand efficiency in service from the management,” he said.

He added that the Senator chose to make a difference in the lives of people in his Senatorial District by building the hospital. “To build such an imposing edifice at a time like this, is not a mean feat,” Saraki said. “To build and then transfer by donation, a hospital of this size and capacity to a different government in power other than his party, freely, for the service of his people is a signature statement of extraordinary leadership,” he said.

The Senate President said he was moved when Senator Mohammad told him that he preferred to build a befitting hospital than the typical practice of sharing money to constituents. He said that with the hospital, the lives of many children and that of many pregnant women will be saved.

During a visit by the Senate President to the Palace of the Emir of Fika, Alhaji Aliyu Mohammed Abale, the Emir expressed gratitude to Saraki and his colleagues for making possible the passage of a law creating the North-East Development Commission (NEDC) which he said will help to rebuild and restore the areas ravaged by the Boko Haram insurgency.

The Emir said his Emirate was a popular commercial centre before the advent of insurgency and sought for the help of all Nigerians to bring back prosperity and normalcy in the area. He thereafter presented a horse to the Senate President as a mark of honour and appreciation.

The Senate President was also conferred with the traditional title of Dikko of Potiskum, by the Emir of Potiskum.

The Senate President who thanked the Emir for the gift said from his experience in the banking sector he could attest to the fact that Borno and Yobe States were major trading centres which all banks could not ignore before the outbreak of the crisis and that he was committed to the rebuilding of the area.

He noted that his interest in bring life back to normalcy in the area made him to quickly intervene to ensure that the Federal Government assumed responsibility for the running of the newly commissioned hospital.