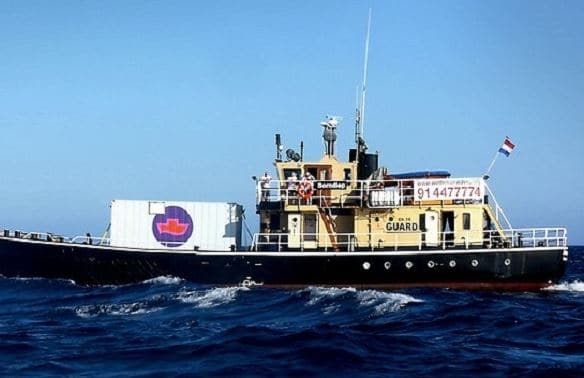 Activists from the group Women on Waves had been guarded aboard their moored sailboat by a navy vessel, Saul Tobar, commander of Puerto Quetzal on Guatemala’s Pacific coast, told reporters.

“Notified of its expulsion from the country’s territorial waters for having failed to comply with immigration regulations” late Saturday, the crew requested permission to set sail, he said. The activists saw no patients.

Immigration authorities ordered the expulsion Friday, saying the group’s members lied in their entry declaration papers, claiming to be tourists and not members of a “health organization” that aimed to perform abortions.

Abortion is allowed in Guatemala only in cases in which a mother’s life is deemed in danger.

The sailboat Adelaide arrived at the southern port of San Jose on Tuesday carrying 10 activists from Guatemala, as well as from Brazil, Austria, Germany, the Netherlands and Spain.

They had planned to offer abortions in international waters off Guatemala’s coast over five days, picking up five women at a time by dinghy.

Abortions were to be induced with two pills. Counseling, treatment and aftercare were also to be available for women seeking the group’s services.

However, following the Dutch-registered boat’s arrival, President Jimmy Morales ordered the government to file a formal complaint with the prosecutor’s office.

Port officials ordered the activists to stay on board their ship, saying they had not declared the motive of their trip and therefore could not go ashore.

Women on Waves says some 65,000 illegal and unsafe abortions take place in the Central American country every year.

Although the group would use all available legal means to carry out its campaign, it would also respect Guatemalan law, spokeswoman Leticia Zenevich said.

Women on Waves had previously said its sailing ship was illegally “detained” by the military, which it accused of “obstructing a lawful protest against the state’s restrictions on the Guatemalan women’s right to safe abortion.”

Its arrival had prompted protests by conservative as well as religious groups.

However, some feminist groups supported the campaign.

Set up in 1999, Women on Waves has generated controversy in the past.

It sent the boat to Ireland, Poland, Portugal and Spain in previous years, prompting protests by pro-life groups in each country.

The group had urged the Guatemalan government to “remove abortion from the penal code,” saying it is “a regular medical procedure and a human right,” and calling for access to contraceptives and free, safe abortions.