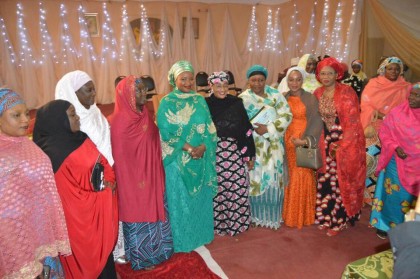 The Honourable Minister for Women Affairs and Social Development, Sen. Aisha J. Alhassan arrived Kebbi state on 26th February 2017. The Minister is in Kebbi for an advocacy and sensitisation visit on the Federal Government’s ‘Government Enterprise Empowerment Fund’ (GEEP) to empower women & young girls; and National Women Empowerment Fund (NAWEF) to empower women at the grassroots. The GEEP fund is a part of the Nigerian Federal government Social Intervention Project that aims to benefit 8.4 million Nigerians.

The Minister was hosted to a dinner in the evening by Her Excellency, Wife of the Governor Official – Dr. Zainab Shinkafi Bagudu. Dr. Bagudu welcomed her to Kebbi while appreciating the efforts of President Muhammadu Buhari, his administration and the Minister towards the development of women. She added that the ministers visit was vital to support the ongoing empowerment programs of the Bagudu led administration in the state.

In her remarks, Senator Aisha J Alhassan said that the grassroots empowerment would provide micro-credit loans, especially for women in rural areas to develop their skills and become self-reliant.The minister urged women to key into the initiative, to free themselves from poverty and rebuild the country’s economy. The governors wife on her part promised to carry the advocacy to women at the grassroots by working with wives of the local government sole administrators many of whom were present.

In continuation of the advocacy and sensitisation effort, women groups from the 21 local government areas of the state will have an interactive meeting with the honourable minister in Birnin Kebbi later today.