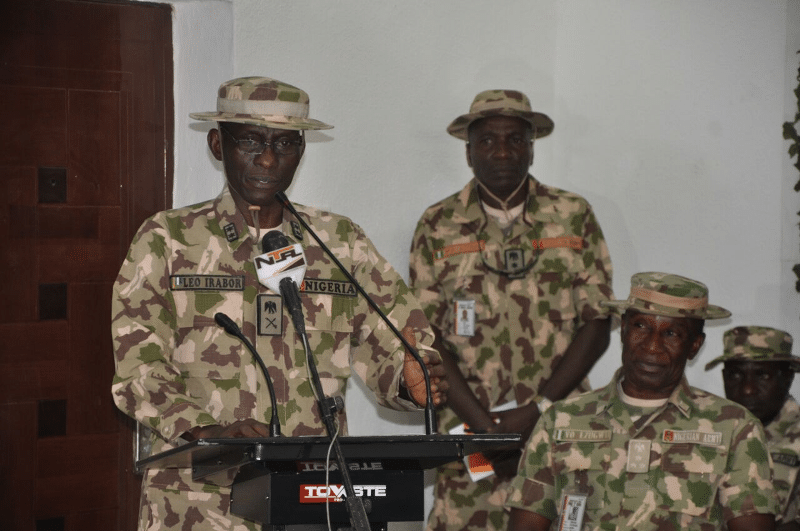 Leo Irabor, Maiduguri: Ladies and Gentlemen, it is my pleasure this afternoon to welcome you all to Headquarters Theatre Command in order to update you with the progress of Operation LAFIYA DOLE. The gallant troops have continued to consolidate the peace. This brief, therefore, will touch on some of the operations and other related issues. Details are as follows:

Clearance Operations. Our troops have conducted some clearance operations during the period under review as follows:
(1) On 1 Feb 17 at about 0950hrs own troops cleared BHT camp at DUSALA where 6 BHT members were killed. Items captured include one Light Machine Gun, 2 RPG tubes and one extra AA gun barrel. Thereafter, our troops came in contact with BHT at BUK where a fire fight ensued. Sadly, 3 soldiers were killed in action while 5 others were wounded. Furthermore, some BHT equipment were recovered which include 9 AK47 rifles, 3 FN rifles, 2 RPG bombs, one mortar tube, one Shilka gun, one gun truck mounted with AA gun and 2 Hilux vehicles.

On 21 Feb 17, own troops cleared MANDAKA and LEMU during advance to GATHA village. The advancing troops encountered and killed 2 BHT at GATHA while a member of vigilante was wounded in action. Items recovered from the insurgents include a list containing names of suspected BHT members, an IED vest, 2 solar panels, a BHT flag, 4 copies of Quran, a national identity card and a voters card. A total of 59 women and children suspected to be held captive by the insurgents were also rescued and are being profiled.

Own troops in conjunction with vigilantes commenced advance on 19 Feb 17 at about 0700hrs and successfully cleared BULTAURI KURA, BULABILI, AMBIYA TASHA and TORO villages. Others include GOL, ZINDIYA, BURBUR, MANGUSUM, TALALA, AJIGIN and DOKSA. The troops cleared the villages. However, a soldier was killed in action while 3 others were wounded in action. Items recovered include assorted ammunition, 13 BHT flags, 3 Holy Quran, a Motorola radio, 2 grinding machines, 5 dane guns, an FN magazine and a packet of Maggi. Others include 2 camouflage jungle hat, 6 Arabic books, a pair of camouflage uniform and a bandolier.

On 22 Feb 17 at about 0830hrs, troops carried out a sweep along DAMASAK – GASHIGAR – GIRI 1 – GIRI 2 – JABULAM – ABADAM – MALLAM FATORI axis. The troops made contact with BHT at GIRI 1 and JABULAM villages where 13 BHT were killed. All BHT camps along the axis of advance were cleared and destroyed. One soldier was wounded in action.
b. Ambush Operations.​ Own troops conducted some ambush operations against the fleeing BHT as follows:

On 14 Feb 17 at about 0445hrs, own troops laid an ambush at a BHT crossing point between KUKARETA and NGAMDU where 3 BHT members were killed. Items recovered include one AK47 rifle, 3 magazines, 2 RPG bombs, 50 rounds of 7.62mm ammunition, a den gun, some local charms and 2 knives.

On 21 Feb 17 at about 1200hrs, own troops sprung an ambush at BHT crossing point within FIRGI along road PULKA – BANKI Junction. The troops made contact with BHT and killed 3 of them. During the operation, one of our trucks was slightly damaged. The items captured and destroyed in situ include one AK47 Rifle and magazine, 7 rounds of 7.62 mm ammunition, 3 bicycles and some food condiments.

BHT Ambush.​On 9 Feb 17 at about 1930hrs, own convoy of troops including 6 BOSG buses conveying some young soldiers encountered BHT ambush along AJIRI – DIKWA road. The troops engaged the BHT but 8 soldiers were killed in action. Also, 18 other soldiers were wounded in action while 3 others were missing in action. A Canter vehicle, a gun truck, 7 AK47 rifles, 2 radios and some equipment were lost in the ambush. Efforts have been ongoing to find all the missing soldiers and to recover the lost equipment.

BHT Attack. On 24 Feb 17 at about 2359hrs, some BHT elements in gun trucks and on motorcycles attacked our troops location at GAJIRAM. Sadly, one officer and 10 soldiers were killed in action and one other soldier was wounded in action. Some of our equipment lost include a gun truck earlier captured from BHT, 11 AK47 rifles and an RPG tube. Two BHT were killed in action as well as 5 motor cycles and one AK47 rifle were recovered. Furthermore, the troops pursued the BHT and recovered a Toyota Land cruiser vehicle that was used by BHT during the attack. other items recovered include 9 rounds of 12.7mm, a metal link for 12.7mm, assorted hard drugs, a note with BHT names in Arabic inscription and a micro chip containing audio messages in Kanuri, Hausa and Arabic preaching.

Discovery of Indian Hemp. On 2 Feb 17 at about 0810hrs, own troops at Song checkpoint stopped a Honda vehicle with registration number BDG 266 EE Lagos with 2 persons onboard for a search. On questioning, the driver identified himself as a policeman but when the soldiers at the checkpoint insisted that the vehicle must be searched, the driver refused and took off. The troops took action and in the process, the driver was pursued and while fleeing, he crashed into a fence which led to his death. A passenger was wounded and evacuated to medical centre in GOMBI for treatment. Items discovered in the vehicle include a fake Nigeria Police Inspector’s ID card and a military belt. The vehicle was searched and discovered to be fully loaded with parcels of substance suspected to be Indian hemp. The suspect and the exhibits were handed over to Nigeria Police and NDLEA at GOMBI respectively for further action.

Arrests. Our troops have arrested several BHT suspects within the period. Some of the cases include:
(1) On 16 Feb 17 at about 1425hrs, own troops deployed at MAFA intercepted one Hassan Adamu aged 27 years. Some locals fetching fire wood informed the troops that the suspect was trying to infiltrate into MAFA town. The suspect has confessed of being a BHT member who is tired of their ideology and wanted to surrender. He is in custody undergoing interrogation.

On 21 Feb 17 at about 1630hrs, own troops intercepted a BHT suspect named Ari Arimaye from BULA – UMARI village who disguised as an IDP to gain access into IDP camp at BANKI. The suspect was searched and the sum of N1,264,000.00 and CFA160,000.00 were found in his possession concealed in a black sack.

On 26 Feb 17 at about 1740hrs, own troops in collaboration with personnel of DSS Tracking Team arrested 3 BHT suspects at Arawa and Mallam Inna area in Gombe metropolis. The suspects are Bilal Muhammed Umar, Bashir Muhammed and Muhammed Maigari Abubakar. They confessed to have fled from Chad Republic and belong to Albarnawi group. The suspects were arrested with some IED materials. They are in custody for further investigation.

Destruction of Suspected BHT Motor Cycles.​On 10 Feb 17 at about 0620hrs, own troops deployed at BARA while on fighting patrol to NJIBULWA village discovered a total of 301 motor cycles suspected to be mustered by/for BHT. The motor cycles were all destroyed in situ.

IED Attack. Some IED incidences were recorded during the period under review:
(1) On 2 Feb 17 at about 1715hrs, own troops while on clearance operation to TALALA/AJIGIN encountered 2 IEDs about 8km to AJIGIN. Sadly, 2 soldiers were killed in action and 4 others were wounded in action. The wounded soldiers have been receiving treatment in our hospital.

Also on 6 Feb 17 at about 0825hrs, own troops while on patrol along NGOSHE – BOKKO HIDE – PULKA road were involved in an IED incident. Sadly, we lost a soldier while 4 others were wounded. A Nissan Hilux gun truck and 3 AK47 rifles were damaged. The wounded soldiers have been evacuated to our hospital and are responding to treatment.

On 19 Feb 17 at about 1000hrs, our troops encountered IED around BULA JIMBAM general area while advancing after clearing WAIYARAM village. Two soldiers were killed in action while 13 others were wounded in action. Our Nissan gun truck mounted with machine gun and a canter truck were damaged. All soldiers killed and wounded in action were evacuated to MAIDUGURI for further treatment.

Surrendered BHT. On 16 Feb 17 at about 1600hrs, a BHT member named Ibrahim Adamu from CHIKIN GUDU surrendered to own troops in MONGUNO.

Summary of Rescued/Arrested/Surrendered BHT Suspects and Other Persons. A total of 7,898 civilians were rescued/arrested as suspected BHT members while 2 others surrendered to our troops during our operations conducted between 2 Feb – 1 Mar 17. Also, a total of 8 foreigners were arrested comprising 4 Chadians, 3 Nigeriens and 1 Cameroonian.

Ladies and Gentlemen, I am constrained to touch on the recently released Amnesty International Report for the year 2016. The reason being that the Report made some unfortunate and unfounded claims regarding the operations in the North East. Whereas the contents of the report have been condemned, I wish to join to say that troops of Operation LAFIYA DOLE are professional in conduct and disposition. They operate within the strict guidance of the Rules of Engagement and the Code of Conduct for troops. What needs to be made clear is that we have observed a consistent attack on the institutions charged with the mandate to protect the Nation against every form of insecurity.

During the trying days of this operation, Amnesty International and other agents working against our nationhood, tried fruitlessly to incite the populace against the military through various malicious publications. Inspite of their distractions, we forged ahead and decimated Boko Haram. We worked assiduously to improve on our Civil-Military Relations, the result of which is very manifest in the unparalleled support, accolades and encouragement we have received from the populace. This position seem to have disappointed the Amnesty International and their unholy allies. Regrettably, some Nigerians are being used as puppets and agents of destruction of our national security institutions. It is sad that when our National Security institutions are gaining traction, these agents after fabricating their reports, sit back and push Nigerians to make the Reports known to the public to give it a National Colour of some sort. What a case of ‘go and destroy your own house’! We must rise up and stand against this subtle and increasing level of neocolonialism. We all have a role to play in this direction. Our national institutions must be strengthened. It is our responsibility so to do. No one can love Nigeria better than Nigerians. I only ask you, the Press to ‘Shine Your Eyes’.

On that note, I urge the general public to continue to report any suspicious persons or objects to the military and other security agencies. Peace-we need, Peace-we have, Peace-we must work to sustain. Whilst appreciating the support and encouragement of the C-in-C, CDS, COAS and other Service Chiefs, we remain absolutely loyal and committed to the cause for which we are assigned to Operation LAFIYA DOLE. Thank you and God bless.