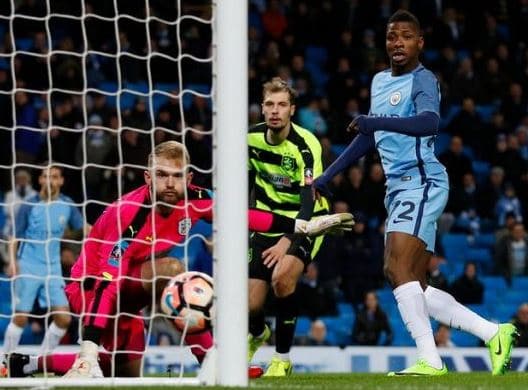 The Nigerian came from the bench, registered his name on the scorers’ sheet as the Citizens crushed the Terriers to book a quarter final berth.

Iheanacho who has struggled to command a regular appearance in Pep Guardiola’s squad this season, replaced two-goal hero Sergio Aguero in the 79th minute and powered in the fifth goal before the final whistle.

With this victory, the Etihad Stadium giants face Middlesbrough in the quarter final.

Iheanacho, who has been invited for Nigeria’s friendlies against Burkina Faso and Senegal expressed his delight having a chance to play plus finding the back of the net.

In an Instagram post, he said: ”Great result for the team tonight. So blessed to get on the pitch, and the goal a bonus!! On to the next round,”

Four days later, Iheanacho came off the bench to score the final goal in City’s 4–0 home win in the Champions League, against Borussia Mönchengladbach.

This was his first European goal for Manchester City. Three days after the 4–0 win, Kelechi scored the second goal, also assisting the third, in City’s game against AFC Bournemouth.

That goal took his tally in the Premier League to 10, allowing him to join an exclusive list of players to have scored 10 Premier League goals before the age of 20. This list includes world class talents such as Wayne Rooney, Ryan Giggs, Nicolas Anelka, Michael Owen and Romelu Lukaku.

Iheanacho scored his fourth goal of the season against Southampton in the Premier League in a 1–1 home draw on 23rd October 2016.

According to Goal, Manchester City will face relegation-threatened Sunderland in the English Premier League on Sunday and the Nigerian would be hoping to get a look in by Guardiola.

City are third on the English topflight log with 52 points from 25 games – 11 points off leaders Chelsea.

Earlier, Huddersfield held Manchester City to a 0-0 draw at the John Smith’s Stadium which lead to the replay match.