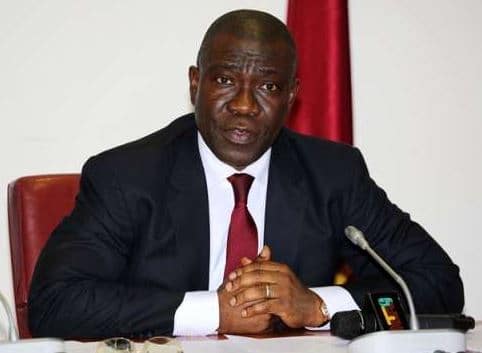 Ekweremadu Talks On How To Fight Corruption, Calls for N50,000 Minimum Wage

The Deputy President of the Senate, Senator Ike Ekweremadu , has called for the urgent decentralisation of the war against corruption if it must be worn and decisively too.

He also called for N50,000 minimum wage and abolition of the Security Vote. Ekweremadu spoke in Ibadan at the weekend, where he delivered the 4th National Public Service Lecture of the University of Ibadan Alumni Association, on the theme: “Federalism and The Legal Framework for Combating Corruption in Nigeria.”

According to the Senator, a situation where the two major anti-corruption agencies in the country, Independent and Corrupt Practices Commission, ICPC and Economic and Financial Crimes Commission, EFCC, does not have presence in the entire country, made the fight against corruption
ineffective.

Ekweremadu insisted that “these do not scratch the surface, as they are grossly inadequate for a vast area like Nigeria and leave the agencies highly
overstretched.”

On the way forward, Ekweremadu said: “We need afar-reaching and in-depth reorientation. Importantly, Nigeria being a federation, the war against corruption must itself be devolved, and federalised, not centralised as is currently the case”.

“Sadly, only Kano state currently has a state agency to fight corruption- the Kano State Public Complaint and Anti-Corruption Commission. This should be emulated, and urgently too, if we must make a headway in the war against graft.

“Similarly, a Code of Conduct Bureau should be established in the states with a Code of Conduct Tribunal to handle cases of civil servants in the states and local government councils. Beside setting up such agencies, there is also the need for the states to domesticate auxiliary federal laws such as the Administration of Criminal Justice Act (ACJA), Fiscal Responsibility Act, among others, to help curb corruption.

“Rivers, Oyo, Anambra, Enugu, Ekiti, Lagos, and Ondo are the only States that have so far adopted the ACJA”.

He urged the country to discard the current arrangement of ‘robbing Peter to pay Paul,’ to make the war against corruption more effective, since people are more likely to show more interest in how the money they truly worked for was being spent, than one thrown on their laps, for
doing little or nothing.

Listing the various mineral resources in the 36 States of the country, Ekweremadu noted that “The good thing is that every State of the federation is sufficiently endowed to survive from its own resources and sweat”.

He also decried a situation where the minimum wage was pegged at N18,000, while some State governors and executives could pocket as much as N2 billion under the cover of Security Vote.

Ekweremadu, however, observed that “while it is easy to point accusing fingers at the governing elites in public and private sectors, we must all embark on individual soul searching from the highest to the lowest rung of the social-economic strata”

“Procurement managers in public and private establishments who have mastered the art of contract inflation and over-pricing; traditional rulers who confer chieftaincy titles on known criminals and corrupt persons; religious leaders and institutions that honour the corrupt are also as guilty as those highly influential persons who clear billions with a stroke of the pen or public office holders who cart away public resources under the cover of Security Vote”, Ekweremadu declared.