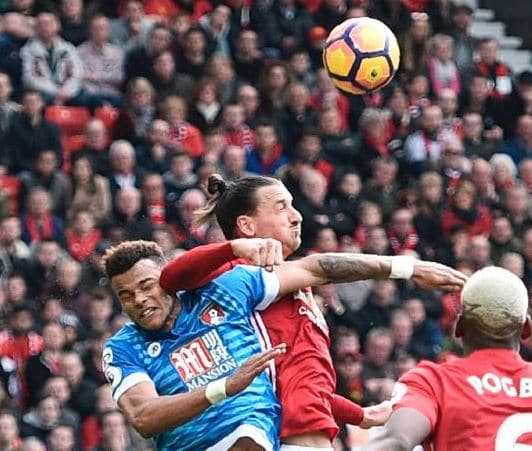 Zlatan Ibrahimovic missed a penalty and could face a retrospective ban from the Football Association after Manchester United were held to 1-1 Premier League draw by 10-man Bournemouth.

The match-winner in last weekend’s EFL Cup final, Ibrahimovic has performed majestically in his debut season in English football but he stole the show for all the wrong reasons against Bournemouth, whose manager Eddie Howe grappled with a bout of illness on the touchline throughout an ill-tempered contest.

Ibrahimovic then found himself embroiled in a flashpoint on the stroke of half-time, when Tyrone Mings trod on his head and he responded by elbowing the Bournemouth full-back.

Referee Kevin Friend lost control of the action at that stage as the United favourite escaped further punishment and Andrew Surman received a second booking – the red card came after an embarrassing delay as Friend briefly forgot the yellow he showed the midfielder for a 33rd-minute foul on Luke Shaw.

Ibrahimovic could not make the most of his reprieve as the excellent Artur Boruc saved his 72nd-minute penalty and Jose Mourinho’s sixth-placed side miss out on the chance to go fourth.

Wayne Rooney was back in the United starting line-up and the home captain, along with Paul Pogba and Zlatan Ibrahimovic were guilty of early wastefulness as Bournemouth were cut open at will.

Cherries striker Benik Afobe lost his footing when one-on-one with David de Gea but the Spain international’s opposite number Artur Boruc remained the busier of the two as he got down to thwart Anthony Martial.

Michael Carrick threaded a magnificent 20th-minute pass through to Martial as Boruc stood firm again and it took a less familiar source to give United the lead.

Carrick played conductor once more, exchanging passes with Pogba and laying the ball out to Antonio Valencia, whose drilled attempt into the box was turned home by Rojo.

The flow of chances quelled after the opener and Bournemouth levelled six minutes before the break – King crashing in a penalty in front of the Stretford End after Phil Jones clumsily felled Marc Pugh.

Ibrahimovic was booked for dissent following that decision and the fired-up Swede was at the centre of a fractious and confused end to the half.

In the ensuing melee, Surman shoved Ibrahimovic and was shown a yellow card. It was only as Friend neglected to do likewise to the ex-PSG star that he remembered Surman was previously booked and the Bournemouth man belatedly saw red.

With 20 minutes left to play, Mourinho unfurled a three-card trick in an attempt to find a way through – Shaw, Carrick and Rooney making way for Jesse Lingard, Marouane Fellaini and Marcus Rashford.

Nevertheless, Ibrahimovic remained flailing at centre stage. After Pogba drew a 71st-minute handball from Adam Smith, the 35-year-old’s penalty was not struck cleanly and too close to Boruc, who saved to his right.