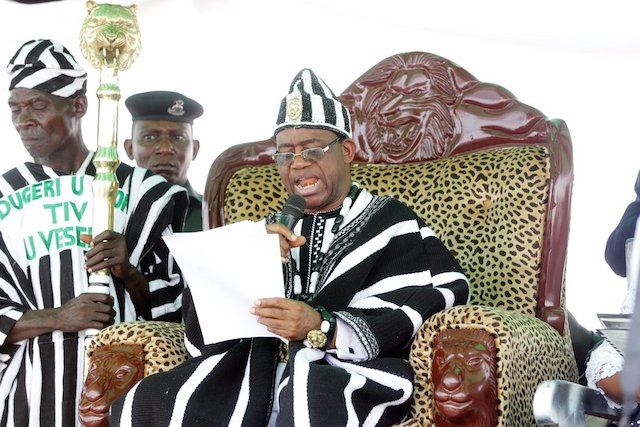 The newly installed Tor Tiv, HRM Orchivirigh Professor James Ortese Ayatse, has called on the federal government to give more Benue people appointments as they are central to the central government’s economic diversification programme.

The paramount ruler stated this in his inaugural speech in Gboko, at a grand ceremony at the Joseph Sarwuan Tarka Stadium. His full title will be His Royal Majesty, Begha U Tiv, Orchivirigh, Prof Ortese Iorzua James Ayatse.

Ayatse specifically noted that ” the Tiv people, who are the fourth largest ethnic group in the country are not represented at the Federal Executive Council (FEC)”.

He urged acting President Yemi Osinbajo to rectify the omission.

“No Tiv man has been appointed Chief Executive Officer of any federal parastatal in the current dispensation; we believe God will help you to correct this marginalization,” he said.

He said the marginalization has become worrisome especially as the Tiv people gave their overwhelming support during the electioneering campaign.

”As you take stock and make your next series of appointments, kindly be reminded that the Tiv Nation is not represented in FEC and have not
benefitted from any appointment at the federal level.”

He said the diversification program of the government was tied to agriculture and the people have comparative advantage owing their agrarian economy.

The paramount ruler appealed to the federal government to involve the Tiv people in its empowerment schemes to facilitate provision of agricultural inputs and enhance skills.

He said such measures would enhance food sufficiency and prevent food crises in the country.

Acting President Osinbajo, represented by the Minister of Agriculture, Mr Audu Ogbeh, promised to present the demands of the Tor Tiv to the president.

He, however, advised the Tiv people to learn to live together with Fulani herdsmen, with whom, they had lived together for ages.

He congratulated the new king for his elevation and prayed for his prosperous reign.

Senate president, Bukola Saraki and former Vice President, Atiku Abubakar, the Sultan of Sokoto all appealed to the Tiv nation to co-exist with the Fulani herdsmen to avoid acrimony for the well-being of both ethnic tribes.

Speaker Yakubu Dogara, on his part prayed for the new Tor Tiv and said he was convinced of his capabilities in giving good leadership to the people and assured that the problems of the Tiv would be considered.

The chairman of the governors forum, Gov. Abdulaziz Yari of Zamfara stated that the governors would come together to tackle the problems of the Tiv nation.

Gov. Samuel Ortom lamented the recent security challenges confronting the state but said measures had been adopted to curtail the challenges.

He reiterated his earlier resolve on ranches as the solution to the perennial crises between farmers and herdsmen.

The governors of Imo, Sokoto, Zamfara, Jigawa, Nasarawa, Kwara, Niger, Taraba, Plateau, Kano and Kogi were amongst hundreds of dignitaries that graced the occasion.