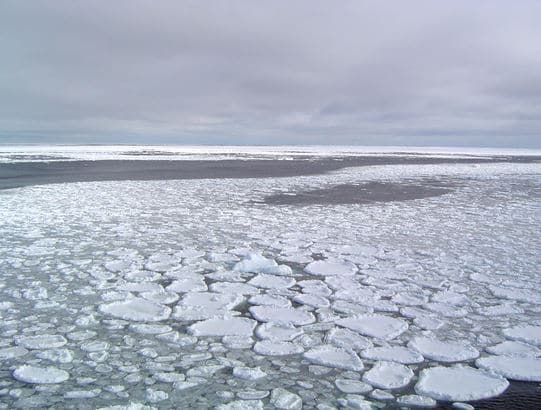 Arctic sea ice may vanish in summers this century even if governments achieved target of limiting global warming set by almost 200 nations in 2015, scientists said on Monday.

James Screen and Daniel Williamson of Exeter University in Britain wrote in the journal — Nature Climate Change after a statistical review of ice projections that “Arctic sea ice has been shrinking steadily in recent decades.

“The shrinking has damaged the livelihoods of indigenous people and wildlife such as polar bears, while opening the region to more shipping and oil and gas exploration.

“Under the 2015 Paris Agreement, governments set a goal of limiting the rise in average world temperatures to well below 2 degrees Celsius (3.6 Fahrenheit) above pre-industrial times.

“The 2 degrees Celsius target may be insufficient to prevent an ice-free Arctic.”

A 2C rise would still mean a 39 per cent risk that ice would disappear in the Arctic Ocean in summers, they said, noting that Ice was virtually certain to survive, however, with just 1.5C of warming.

They estimated a 73 per cent probability that the ice would disappear in summer unless governments made deeper cuts in emissions than their existing plans.

They estimated that temperatures would rise 3C (5.4F) on current trends.

The Arctic Ocean is the smallest and shallowest of the world’s five major oceans. The International Hydrographic Organization (IHO) recognizes it as an ocean, although some oceanographers call it the Arctic Mediterranean Sea or simply the Arctic Sea, classifying it a mediterranean sea or an estuary of the Atlantic Ocean.

The sea ice is affected by wind and ocean currents, which can move and rotate very large areas of ice. Zones of compression also arise, where the ice piles up to form pack ice.