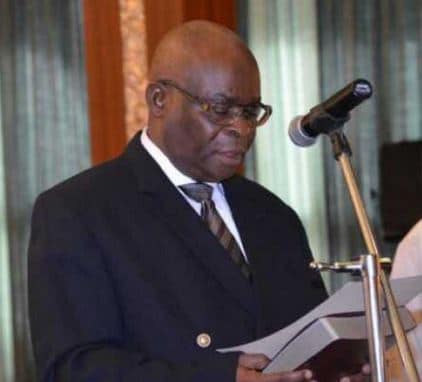 Onnoghen Sworn In As Chief Justice Of Nigeria

Justice Walter Samuel Onnoghen has been sworn in as the 15th indigenous Chief Justice of Nigeria.

Acting President Yemi Osinbajo who performed the ceremony challenged the appointee as head of the Nation’s Judiciary to live up to the expectations of the high office by upholding higher moral and ethical standards at all times.

He said the mere perception of judicial malfeasance and questionable delays will not poison the waters of justice but also defeats it’s essence.

The acting President therefore called on the Chief Justice of Nigeria ensure that  justice delivery is truly just and fair to all.

READ: Who Is Walter Samuel Nkanu As Senate Confirms Onnoghen As CJN

Acting President Osinbajo who described Justice Onnoghen as the right choice for the nation, used the opportunity to convey President Buhari’s best wishes to him on his appointment.

The new Chief Justice of Nigeria Justice Walter Onnoghen who thanked the President for finding him worthy of the appointment promised to keep to his oath of office in the interest of democracy, rule of law and good governance.

In the mean time by virtue of his new appointment Justice Walter Onnoghen was conferred with the National Honour of Grand Commander of the order of the Niger  (GCON) by Acting President Yemi Osinbajo.

Justice Onnoghen from Cross River state was born in 1950 and became Justice of the Supreme Court in 2005.