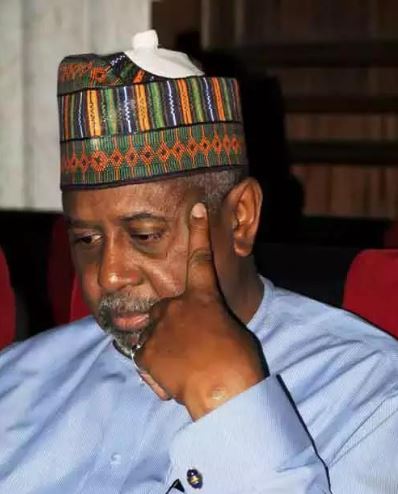 In continuation of the Dasukigate trial, Hassan Seidu, a witness of the Economic and Financial Crimes Commission, EFCC, in the ongoing trial of Nicholas Ashinze, a former aide to ex-National Security Adviser, Sambo Dasuki, on Tuesday, told Justice Gabrial Kolawole of the Federal High Court, Abuja how Ashinze and others got N5.6billion from the Office of the National Security Adviser.

This was stated in a press release made available to the media by the Commission’s Head of Media and Publicity, Wilson Uwujaren on Wednesday.

Seidu, who testified as the first witness said he was part of the team that conducted search in Ashinze’s house, located at No. 67 Vision Court Estate, Apo, Abuja.

Ashinze, a retired colonel, is standing trial alongside an Austrian, Wolfgang Reinl, Edidiong Idiong and Sagir Mohammed, on a 13-count charge of corruption and money laundering to the tune of N36.8billion.

READ: Ekweremadu Talks On How To Fight Corruption, Calls for N50,000 Minimum Wage

The PW1 said that on December 23, 2015, Ashinze was brought to their office for interview and after the interview he was asked if he would be able to respond to allegations of money laundering leveled against him.

Seidu said after accepting, Ashinze’s statement was recorded, but it was his colleague, Mohammed Goje, who administered the cautionary word to him where he signed and voluntarily wrote his statement.

He further said that a search was conducted at his (Ashinze) house at Apo where some items were recovered.

The admissibility of the search warrant which Ofem Uket, counsel to EFCC, sought to tender as evidence was objected to by Ashinze’s counsel, L. S. Nwoye, who argued that it had no date.

Nwoye cited Section 147 of Administrative of Criminal Justice Act, ACJA, which stated that a document must have date on it for identification.
Justice Kolawale, in a bench ruling, held that the issues raised were omissions of details. He overruled the objection and admitted the search warrant in evidence as Exhibit 2.

He also admitted items recovered which are one black diary, one blue notebook and one page of unsigned document, written in red ink dated April 17, 2014 in evidence as Exhibits 2a, b and c respectively.

Seidu also said the one page of unsigned document written in red ink (Exhibit 2c) contained list of 5 companies, their banks and account numbers of each of the company with amount that has been transferred to them.

He said they got analysis of it and found out that N3.125billion was transferred to the account of Geonel Integrated Services (5th defendant) with Heritage Bank from the Central Bank of Nigeria, CBN.

“N120million was transferred to Unity Continental Nigeria Limited (6th defendant) on April 22, 2014, and N150 million in favour of Law Partners and Associates with Zenith Bank on April 22, 2014.

“On April 23, 2014, Sologic Integrated (9th defendant) got N120million from Geonel’s account at Heritage Bank, and Law Partners also received N450million another payment which is not in the document on May 5, 2014.

“The N450 million was transferred from Geonel’s account domiciled in Heritage and it was the only transaction not captured in the document,” Seidu said.

He further stated that they found out that the document (Exhibit 2c) was prepared three days after N3.125billion was given value in the account of Geonel Integrated Service Limited.

According to the PW1, they also found out that N2.5billion was transferred from CBN to Geonel’s account on February 16, 2015, and the contract was awarded from ONSA to Geonel Integrated Services.

When asked by the prosecution the relationship of the defendants to the companies, Seidu said Unity Continental Nigeria Limited was owned by Sagir Mohammed (4th defendant) who is a course mate and friend to Dasuki.

“Law Partners and Associate belong to Barrister Edidiong, the 3rd defendant who is a friend and associate to Dasuki.

“Helpline Organisation is owned by Bello Fadile, who was formerly second- in- command to Dasuki.

He added that after execution of the search on December 29, 2015, “we asked Ashinze if he would make statement in relation to the items recovered from his house, he accepted and we recorded it.”

The prosecution applied to tender the defendant’s statement in evidence, but its admissibility was objected to by Nwoye based on Section 6 of ACJA which demands voluntary giving of statement.

He argued that Section 17 (1) and (2) requires presence of lawyer before statement can be taken and that the EFCC investigators did not counsel him on the need to keep silent.

The prosecution, in response, said Ashinze was not compelled to write statement in EFCC’s office rather he voluntarily wrote it.
Justice Kolawole has adjourned to March 21, 2017 for ruling on the objection raised by the defence.