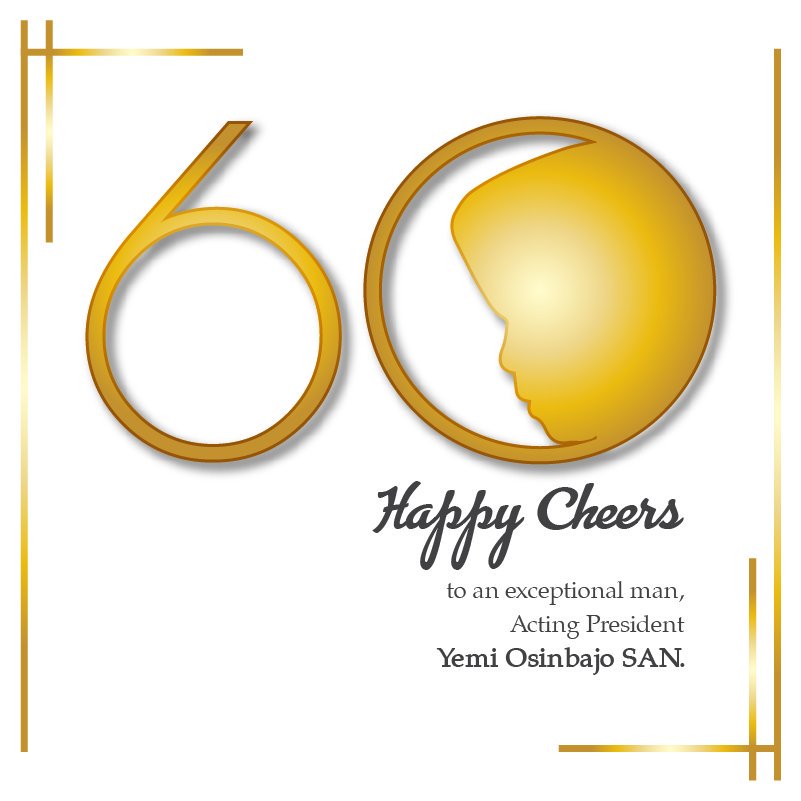 Acting President Professor Yemi Osinbajo marks his 60th birthday today. Although the professor of law has been inundated with birthday wishes by politicians and ordinary Nigerians, the day will be remarkably marked in all simplicity. Prayers yes. But do not expect a lavish state ball.

Nothing demonstrates better how the Acting President will want to mark his day than the card displayed on his Facebook and Twitter Pages. It is simple and bears a simple message that defines the Professor: ‘happy Cheers to an exceptional man, Acting President Yemi Osinbajo, SAN”.

Oluyemi “Yemi” Oluleke Osinbajo was born into the family of Opeoluwa Osinbajo on 8 March 1957 at Creek Hospital in Lagos.

From 1975–1978, he studied for his undergraduate degree in Law at the University of Lagos, where he was awarded a LLB Law degree. From 1979–1980 he attended Nigerian Law School. In 1981, he was awarded a Master of Laws after attending the London School of Economics.

From 1979–1980, Osinbajo served the compulsory one year youth services as a legal officer with Bendel Development and Planning Authority (BDPA), Bendel state.

From 1997 to 1999 he was made Professor of Law and Head of Department of Public Law, University of Lagos. From 1999 to 2007, Osinbajo was Member of Cabinet, Lagos State Ministry of Justice, also Attorney-General and Commissioner for Justice.

From 2007 to 2013 Osinbajo was once again employed as a Professor of Law, Department of Public Law, Faculty of Law, University of Lagos. In 2007, Osinbajo was made Senior Partner, Simmons Cooper Partners (Barristers and Solicitors), Nigeria.

Osinbajo was also a Senior lecturer at the Lagos State University.

After the formation of the All Progressives Congress (APC) in 2013, Yemi was tasked, with other notable Nigerians, to design and produce a manifesto for the new political party. This culminated in the presentation of the “Roadmap to a New Nigeria”, a document published by APC as its manifesto if elected to power.

The highlights of the Roadmap included a free schools meal plan, a conditional cash transfer to the 25 million poorest Nigerians if they enroll children in school and immunise them. There were also a number of programs designed to create economic opportunities for Nigeria’s massive youth population.

On 31 March 2015 Buhari was confirmed by the Independent National Electoral Commission (INEC) as the winner of the presidential elections. Thus Osinbajo became the Vice President-elect of Nigeria. They were both sworn in on 29 May 2015.

Yemi Osinbajo assumed office after taking the oath of office on 29 May 2015 at the Eagle Square, Abuja. As the Vice President of the Federal Republic of Nigeria, he is expected to oversee the economic planning team and report, as well as make recommendations, to the president who takes the final decision.