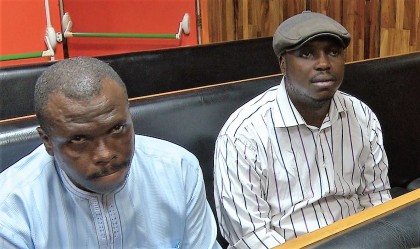 The Two Accused Of Job Scam

The Economic and Financial Crimes Commission, EFCC, on Thursday, March 9, 2017 arraigned the duo of Tomoloipre Tarigha and Ayooluwa Nuga before Justice O. O. Goodluck of the Federal Capital Territory High Court sitting in Maitama, Abuja, on a 12-count charge bordering on conspiracy, obtaining by false pretence and forgery.

Tarigha, a staff in the office of the Auditor-General of the Federation, and his co-accused allegedly conspired to defraud their victims to the tune of N20 Million under the pretext of securing employments for them in the federal civil service.
The offence contravenes Section 1 (1) (a) and punishable under Section 1 (3) of the Advance Fee Fraud and Other Fraud Related Offences Act, 2006.
One of the counts reads: Read; Yakubu’s Rights Enforcement Suit: EFCC Challenges Court’s Jurisdiction

“That you, Tolomoipre Tarigha (M), Ayooluwa Nuga (M) and others still at large, sometime between October and November 2014 in Abuja, within the jurisdiction of this Court, did conspire among yourselves to commit an illegal act, to wit; obtaining money under false pretences from Mr. Innocent Ochijenu, Musa Success Jibrin and Adama John Akoji, under the pretence that you will secure employment for them with the Federal Civil Service Commission, which representation you knew to be false and thereby committed an offence contrary to Section 8 (a) and punishable under Section 1 (3) of the Advance Fee Fraud and Other Fraud Related Offences Act 2006.”

“That you, Tolomoipre Tarigha (M) between 25th day of November 2014 and 12th day of December 2014 at Abuja, within the jurisdiction of this Honourable Court did with intent to defraud, obtained the sum of N20,500,000 (Twenty Million, Five Hundred Thousand Naira Only) from one Innocent Ochojeni, under the false pretence that you will secure employments for him and five of his acquaintances (Aminu Obaje Akwu, Aishat Ejura Musa, Achile Akor Alex, Success Musa Jibrin and Ufedo Adejoh) with Federal Civil Service Commission, which representation you knew to be false and thereby committed an offence contrary to Section 1 (1) (a) and punishable under Section 1 (3) of the Advance Fee Fraud and Other Fraud Related Offences Act, 2006 of the same Act.”

The defendants pleaded not guilty to the charge.
In view of their plea, counsel to EFCC, S. A. Ugwuegbulam asked the court for a date for the commencement of trial.
Having not filed any application for bail, the defence counsel, K. B. Asunogie, prayed the court to remand the defendants in EFCC custody to enable him have access to them this evening and “perfect what needed to be done on their behalf”.

Ugwuegbulam objected saying, “the proper thing to do is to remand the suspects in prison custody, pending formal
application for bail.
“The EFCC is not an appendage of the court, prison in Kuje or anywhere in the country”, he said.
The matter was adjourned to May 9 – 10, 2017 for hearing.