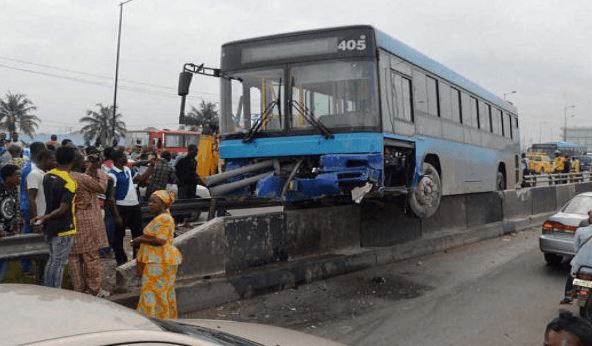 Report says Sixty (60) persons survived a bus accident in Enugu on Friday. The 60 passengers escaped death when the fully loaded commercial luxury bus crashed into the drainage on the Enugu-Onitsha expressway.

The bus was trying to avoid collision with a petrol tanker on Friday when it crashed.

An eye witness, Mr John Obi, told the News Agency of Nigeria (NAN) that the bus with plate number KRD 730 XJ, belonging to Young Shall Grow motor, took off from Onitsha and was heading for Taraba

Obi said the passenger bus, which was descending the Kwata bridge just before the popular Unizik junction in Awka, on top speed was trying to avoid an unmarked petrol tanker.

He said that the tanker was turning on the Expressway after discharging its content at a nearby filling station.

He said though, no live was lost but some passengers sustained various degrees of injuries.

One of the victims, who identified himself as Chukwudi, said he was thankful to God for the narrow escape but was not psychologically balanced to speak further.

“I just thank God, because this could have been my last day, for me I thank God,” he said.

The Vice Chairman of Red Cross Society in Anambra, Prof Peter Katchy, whose team was part of the rescue operation, confirmed that there was no death but few passengers sustained minor injuries which had been treated.

Katchy called on the Enugu Electricity Distribution Company (EEDC) to restore the electric pole that was knocked down and remove cables lying dangerously on the Expressway.

“It was a serious crash and we responded immediately but thank God no death was recorded.

“We have called on the EEDC to immediately remove the pole and wire from the highway.

“We do not know the immediate cause but it would be known after our investigation,” he said.

Meanwhile, a combined team of Police, FRSC, NSCDC personnel, and the state Fire Service were at the scene of the accident.

NEWER POSTNetwork News Summary 11-03-2017; President Buhari arrives,promises to rededicate himself to the service of the nation
OLDER POSTEuropa League, Chelsea and More and the Chance of a Life-Time