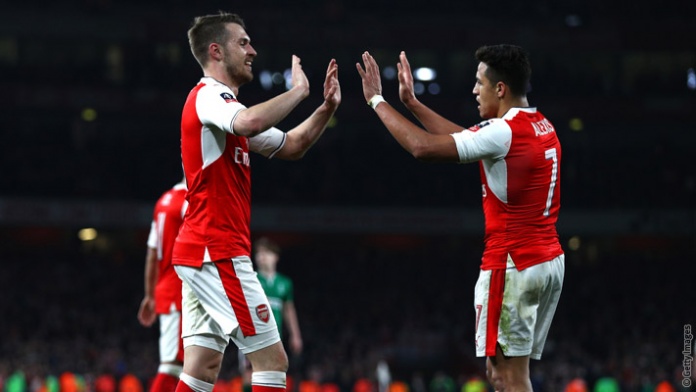 Gunners are through to a record 29th Emirates FA Cup semi-final after overcoming a vibrant Lincoln City side at Emirates Stadium.

Arsenal.com report, Theo Walcott and Aaron Ramsey both went close during the opening stages, but we were indebted to Petr Cech, who made a big save to deny Nathan Arnold.

Lincoln on the other hand continued to frustrate the Gunners, breaking traditional Arsenal smooth play and denying clear chances until right on the stroke of half-time when Walcott slotted home from inside the box.

Theo’s goal proved to be the decisive moment in the game, and Arsenal looked a whole new side after the break as they laid siege to the visitors’ goal.

Frenchman talisman and Arsenal’s last season top scorer, Giroud scored the second in the 53rd minute, before an own goal from Luke Waterfall extended our advantage.

The current team top scorer, Alexis Sanchez curled in the fourth goal, before Ramsey added a fifth after fine work from the Chilean in the Lincoln box.

Arsenal continued to pour forward in search of further reward, but they had to be content with their lot as they booked their place in the semi-finals.

Arsenal players and fans are regular visitors to Wembley Stadium with a record 29 appearance in the FA Cup semi-final.

NEWER POSTWhy Estate In Borno State Was Named After Bola Ahmed Tinubu
OLDER POSTSpace Exploration: US congress approves $19.5 billion for NASA to get humans to Mars by 2033