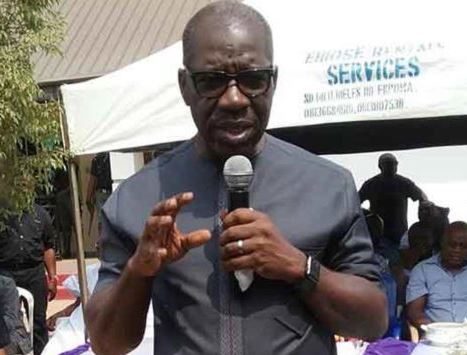 Governor Godwin Obaseki of Edo State has said that a female law graduate at the Internally Displayed Persons (IDP) camp in the state would be considered for employment.

Obaseki stated this while receiving members of the Commonwealth Scholars and Fellows Alumni Association of Nigeria at The Government House in Benin on Monday.

The governor, noting that it was unusual to grow a generation in a refugee camp, said that more information about the female refugee, who recently concluded her university degree in law, would be required in order to process her employment.

He also stressed that there was need to integrate the people in the camp into the society, adding that his government had no choice but to make the IDPs part of its focus.

Obaseki further said that the school built inside the camp would be commissioned in a week to allow for its use by the inmates.

He said that his administration was committed to the welfare of people in the state, whether indigent or non-indigent.

He, however, noted that the responsibility of rehabilitation of the people in the IDP camp should not be left to the state government alone.

Suing for peaceful coexistence in the country, Governor Obaseki emphasised that no meaningful development could be made in a society devoid of peace.

He commended the Commonwealth Association for their visit to the camp and for giving succour to the inmates.

Earlier, the President of the Commonwealth Scholars and Fellows Alumni Association of Nigeria, Dr Uduak Udom commended the state government for the level of support given to the IDP camp.

Udom said that the members of the association had earlier in the day visited the camp as part of its activities to celebrate the Commonwealth Day, which hold every second Monday in the month of March.