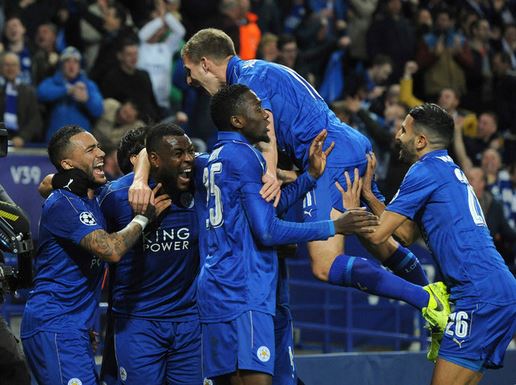 Champions League : Leicester City In The Wave Of Another ‘Fairly Tale’

The English Premier League Champion’s, Leicester City defied the odds to overcome a first-leg deficit against Sevilla to progress to the quarter-finals of the 2017 UEFA Champions league.

Craig Shakespeare’s side provided the King Power Stadium faithful with another memorable night Tuesday as the hosts triumphed 2-0 to progress 3-2 on aggregate, with Kasper Schmeichel saving a penalty in each leg.

In what appears to be another attempt by the Foxes to clinch an European title in a ‘fairly tale’ manner of their last season’s EPL Championship, they will have to deal with the likes of Real Madrid, Barcelona and Bayern Munich for that dream to come true.

Leicester’s Right back, Danny Simpson says face such tough opponents will hold no fear for Leicester City and that they can beat anyone.

According to Goal, Simpson said: “They’re all tough out there. Whoever we play, we’ll just be confident over two games. If we perform like that, with team spirit like that and togetherness over two games, we’ll believe.”

Leicester won the Premier League on 2 May 2016 under the watch of Claudio Ranieri as manager, after Tottenham Hotspur failed to secure a win against Chelsea after only drawing the match 2–2.

This completed the fastest seven-year rise to the title except for Ipswich Town in 1962, and Leicester faced a far more unequal top tier than Ipswich did back then.

Bookmakers thought Leicester’s victory was so unlikely that Ladbrokes and William Hill offered odds of 5,000–1 for it at the start of the season. Neither bookmaker had ever paid out such long odds, and the trophy resulted in the largest payout in British sporting history with total winnings of £25 million.

The scale of the surprise attracted global attention for the club and the city of Leicester.

Ranieri was sacked on 23 February 2017, due to the club’s continuing poor form, resulting in them being only one point above the relegation zone. Gary Lineker called the sacking “very sad” and “inexplicable”, whilst Manchester United manager Jose Mourinho blamed it on “selfish players”.

Less than a week after Ranieri was sacked, Craig Shakespeare took over as caretaker manager, and in his first match in charge Leicester won 3-1 against 5th place Liverpool, with Jamie Vardy scoring a brace against Jürgen Klopp’s side.

In his second game as caretaker, Shakespeare then instigated another 3-1 victory over Hull City.

Following two impressive results and initiating ‘the type of positive response that we hoped change would bring,’ the club’s owners then decided Shakespeare would become the club’s manager until the end of the season.