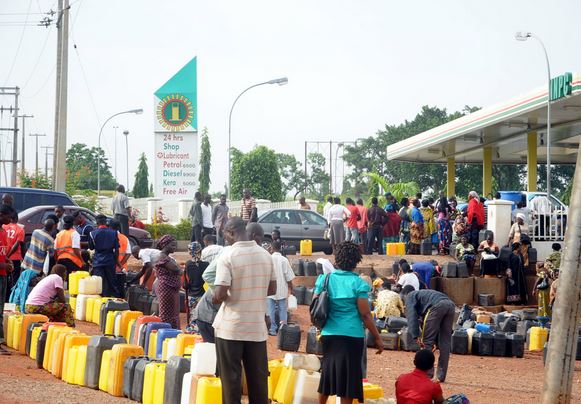 The House of Representatives has urged the Nigerian National Petroleum Corporation (NNPC) and other relevant agencies to urgently regularise the supply of kerosene nationwide in order to normalise its pump price.

The House also mandated its Committee on Petroleum Resources (Downstream) to liaise with relevant agencies to inquire about the high cost of the product to unravel the root cause of kerosene explosions in the country.

This followed the adoption of a motion on Wednesday titled, “Need to Arrest the Resurgence of Kerosene Explosion with Attendant Fatalities’’, sponsored by Rep. Agbo Dennis (Enugu-PDP).

Leading the debate, Dennis condemned the recent explosion in Ngenevu Area of Coal Camp in Enugu metropolis on Jan. 30.

He said the incident occurred after a lantern exploded and burnt Mr Hillary Ngwoke, killing his pregnant wife and son.

According to him, Nigerians are being confronted with double tragedy of high cost of kerosene which sells at N260 per liter and danger from kerosene adulteration.

He argued that the product was sold and dispensed by unregistered vendors out of surface tanks at unregulated locations that were highly prone to sharp practices.

“There is always a nexus between the high cost of kerosene, its adulteration with cheaper fuel and the attendant fatalities from explosions,’’ Dennis said.

Contributing to the debate, Rep. Toby Okechukwu said the mercenary for quality control in dispensing of petroleum products should be put in place.

Okechukwu said that kerosene must be dispensed by authorised marketers to check the rate of explosions.

Rep. Emmanuel Orker-Jev called on the regulators to improve on the policing strategies to curb the menace.

“Whatever the differential is, I believe the regulators ought to do enough policing to discourage those who adulterate the product,’’ Orker-Jev said.

Ruling on the matter, Speaker of the House, Rep. Yakubu Dogara mandated the Committee on Legislative Compliance to ensure implementation and report back to the House in four weeks.

NEWER POSTChampions League : Leicester City In The Wave Of Another ‘Fairly Tale’
OLDER POSTWife of The President Aisha Buhari Charge Nigerians To Know Their Rights As Consumers