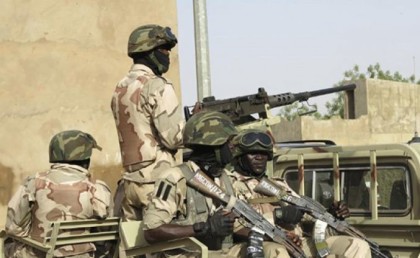 The Nigerian military foils an attempt by Boko Haram terrorists to attack Magumeri town yesterday evening. According to the statement by Army Spokespersons, Brigadier General Sani Kukasheka Usman. He said that the suspected Boko Haram terrorists attempted to unleash mayhem on Magumeri town, Magumeri Local Government Area, Borno State yesterday evening but the timely intervention of the military thwarted the attack.
Also Read; Troops Destroy Boko Haram Terrorists Logistics Base At Shirawa
“While troops are still consolidating and mopping up, it is imperative to state that preliminary investigation shows that the attackers of Magumeri came from the same community. The terrorists that attack the village are well known to the people”.
He noted that the village was never attacked throughout the period of the insurgency for some inexplicable reasons.  The terrorists and their collaborators hibernating in the area were never exposed. There seems to be unholy alliance between the terrorists and the villagers.
Also read; Managing The Boko Haram Crisis In Borno State – Governor Kashim Shettima
“Consequently, we are constrained to state that it’s now high time for the people to take up the fight themselves and help the Nigerian military  and other security agencies to protect them. It is a grievous mistake and criminal offence to continue to shield or harbour any known Boko Haram terrorist in their midst”.
He urged the people to expose terrorists and their movements promptly reported to the security agencies. The terrorists are inhuman and barbaric, therefore cannot be trusted to spare anyone in perpetuating their  inhuman acts.
“It is imperative that all communities in the North East especially Borno State, should fully cooperate with the military and the Security agencies by exposing Boko Haram terrorists in their respective towns and villages”.