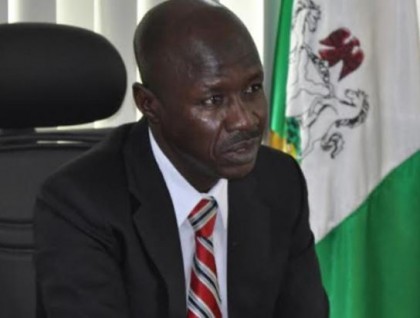 Ibrahim Magu On His Rejection At The Senate

The Special Adviser on Media and Publicity, Femi Adesina said, the president will communicate his reaction to the Senate after receiving an official letter from them on his rejection. Mr Adesina made this known on his twitter handle while reacting to rejection of EFCC Acting Chairman, Ibrahim Magu, during his screening yesterday at the plenary.

“The Presidency will respond to the non-clearance of Magu as EFCC boss, after it receives official communication in writing from the Senate.”

It could be recalled that the Senate on Thursday rejected the nomination of Ibrahim Magu as the Chairman of the Economic and Financial Crimes Commission (EFCC). Also Read; Senate Screens Ibrahim Magu, Rejects Him As EFCC Chairman

The Senate rejected the nomination following a letter by the Department of State Security (DSS) which upheld an earlier letter that Magu failed the integrity test and was unfit for the office. Also Read; EFCC: All You Need to Know About Ibrahim Magu