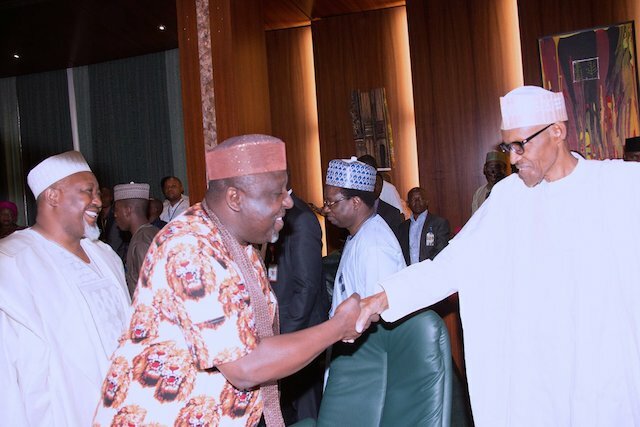 Buhari Apologises to Governors For Barring London Visits and More

Ismaila Chafe, NAN: President Muhammadu Buhari told Nigerian state governors today that their priority when they receive the second tranche of Paris loan refund should be to pay salaries, pensions and gratuities.

Buhari apologised to governors for barring them from visiting him while he was resting in London. “I didn’t want the government to move to London. I wanted it to remain here and I am glad it did,” he said.

“I will not rest until I address those issues that affect our people. One of these basic things is the issue of salaries. It is most important that workers are able to feed their families, pay rent and school fees, then other things can follow,” Buhari said, according to a statement by the president’s Senior Special Assistant on Media and Publicity, Malam Garba Shehu.

The National Economic Council is made up of State Governors and chaired by the Vice-President Yemi Osinbajo.

Because of the importance, President Buhari attaches to the welfare of the Nigerian workers, serving and retired, he directed the Ministry of Finance and the Central Bank of Nigeria to act with dispatch in releasing the second tranche, about N500billion, of the London-Paris Club refunds to states.

The president expressed the hope that the early release of the refunds by the Minister of Finance, Mrs Kemi Adeosun and CBN Governor, Godwin Emefiele, would ease the financial hardships being experienced by the states.

“It is most important that workers are able to feed their families, pay rent and school fees, then other things can follow,” he said.

The President, who went round the Council Chambers to greet the governors one after another, praised the unity of the Forum of State Governors.

He thanked them profusely for their display of “love and respect” to him.

The President said he was overwhelmed by his recent experience in which states, irrespective of political differences charged their citizens to pray in mosques and churches for his well-being.

Buhari also apologised to governors for barring them from visiting him while he was resting in London.

“I didn’t want the government to move to London. I wanted it to remain here and I am glad it did,” he said.

After narrating what he went through while on that vacation, President Buhari noted the suggestion by the governors for him to have more rest.

He, however, insisted that he would remain relentless in the pursuit of the interest of the Nigerian people at all times.

The Chairman, Nigerian Governors Forum, Abdul-Aziz Yari of Zamfara, assured the President, on behalf of his colleagues, that they would continue to support his policies and actions which they had adjudged as being in the nation’s best interest.

The governors of Imo, Akwa-Ibom, Osun and Abia States thanked the President for saving the day for states through the first tranche of the London-Paris Club refunds while calling for the immediate release of the second one.

They also commended the trust the President reposed in Vice-President Yemi Osinbajo, whom they said did not disappoint when he acted as President.

NEWER POSTCPC To Investigate NBC over Fanta, Sprite Mixture Danger
OLDER POSTPresident Buhari Gets A Call From King of Morocco