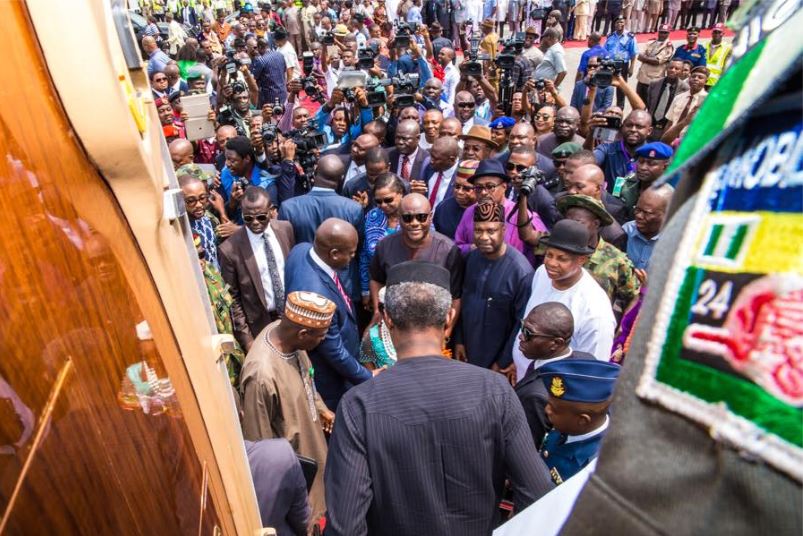 Laolu Akande, Abuja: While past leadership and governance failures explain the worrying conditions of Nigerians in the oil-producing communities, the people still deserve a fair deal, according to the Vice President Yemi Osinbajo, SAN.

Prof. Osinbajo said this was the position of President Muhammadu Buhari and it is the reason the administration is now advocating a New Vision for the people of the Niger Delta. He spoke earlier today at the Presidential Villa while chairing an inter-ministerial follow-up meeting with relevant government ministries, departments and agencies involved in the Niger Delta.

Continuing he said “in-spite of the past leadership failure, the Niger Delta people deserved a fair deal.”

The Vice President told the inter-ministerial team that includes ministers and others MDA heads that the meeting is to ensure that “we are faithful to the promises and the spirit of the presidential engagements with the people of the Niger Delta.”

In attendance at the meeting were the Niger Delta Affairs Minister, Pastor Usani Uguru Usani, Petroleum Resources Minister of State, Dr. Ibe Kachikwu and the Environment Minister of State, Alhaji Ibrahim Jubril. Others include the Presidential Adviser on Amnesty Programme Major-General Paul Boroh, and the Managing Director of the Niger Delta Development Commission, NDDC, Mr. Nsima U. Ekere.

In his presentation the Minister of State for Environment disclosed that the ministry has now fully engaged the Ogoni Clean-Up Project Coordinator, Dr. Marvin Dekil, himself an indigene of Ogoni. Besides he also revealed that potential contractors have been visiting the site to demonstrate available and suitable technology to be used for the Clean-Up.

Later the Vice President also received a delegation of western diplomats from countries involved in the oil industry in Nigeria. The delegation was led by the Dutch Envoy in Nigeria, Ambassador John C.M. Groffen, and included Ambassadors, High Commissioners or their deputies from United Kingdom, France, Germany, Italy, United States and the European Union.

He added that the Buhari presidency is therefore working on how to make a positive and long-lasting impact in the region in a way that transforms the lives of the people from the “treasure trove of Nigeria.”

The Vice President then added that the FG will welcome the partnership and support of the western countries in that effort.

Speaking on behalf of the delegation Ambassador Groffen said the countries represented at the meeting would like to stay involved in the dialogue, while commending the approach of the Buhari administration in the matter.