(VON) The Nigerian House of Representatives is providing legal framework for the establishment of Research Centre for the production of snake bite vaccines.

This became necessary as the Lawmakers expressed concerns about the increasing cases of snake bites in some parts of the country, as well as the high cost of its treatment.

A bill to that effect has already scaled through second reading at the House’s Plenary aimed at developing a healthy and low-cost techniques and design pilot production facilities for the manufacture of effective, safe and affordable anti-snakes-venoms.

Leading debate on the bill, the sponsor, Hajia Fatima Bello from Gombe State said the bill is to provide national leadership and collaboration in Snake Bite research, production of venom as well as guide to scientific improvement to snake bite prevention, treatment and care.

She said the current arrangement where the anti-snake venom are imported from Britain or South Africa, cost government a lot, while victims suffer most while looking for treatment.

” Last year, a total of 330 Carpet Vipers, 14 Puf Arders and 4 Black Cobras were exported to the Liverpool School of Tropical Medicine, for the extraction of venoms for analysis and production of anti-Snake vaccines that can accommodate our peculiar local situation.” the Lawmaker said.

Contributing, the co-sponsor of the bill, Mr. Thimothy Simon Gorlu, from Plateau State said the bill is seeking for a holistic way addressing the menace. 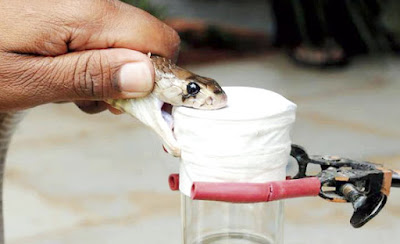 “The nation is at great risk of economic and scientific challenges if this situation continues, and the productive population will be crippled by snake invasion.

The government policy of going back to the land (agriculture) will suffer because contact with snake is mostly on the farms.” Gorlu argued.

Snakebite is an injury caused by the bite of a snake. It often results in two puncture wounds from the animal’s fangs. Sometimes venom injection from the bite may occur. This may result in redness, swelling, and severe pain at the area, which may take up to an hour to appear.

According to statistics, Snake Bite was established as a serious public health emergency through a comprehensive sample epidermiological survey which was carried out in randomly selected States, following continues complaints from States such as Gombe, Bauchi, Benue, Plateau, Kwara, Oyo and Anambra of increased cases and death from snake bites affecting mostly farmers.