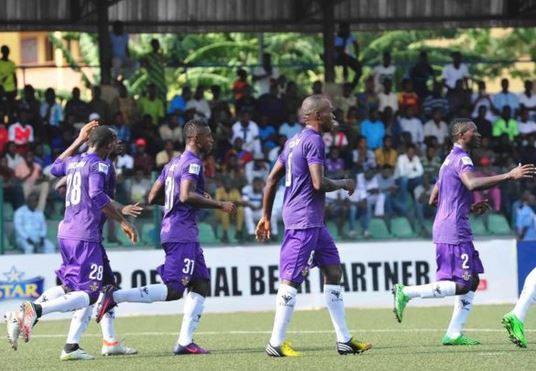 MFM FC of Lagos went the extra length to grind out a 2-1 victory to claim maximum points from visiting table-toppers, Plateau United, in their Nigeria Professional Football League Matchday 14 encounter at the Agege Stadium on Sunday evening.

A brace from NPFL leading scorer, Stephen Odey, and a second half strike by Peter Eneji from a beautiful combination by Plateau United highlighted the pulsating game.

The visitors had come with an articulate approach to keep control of the game with their highly experienced defenders led by Golbe Elisha stopping all incursions from the Olukoya Boys and it seemed there would be no breakthrough before the break.

But in added time of the first half, Odey peeled off his markers, received Sikiru Olatunbosun’s pass and with two touches guided the ball past John Gaadi.

With MFM leading into the break, Plateau returned in the second half with a different game plan which saw them take the battle to the hosts with Mafeng Pam, Joshua Obaje and Ibeh Johnson combining well with substitute Peter Eneji who fired in the equalize in the 62nd minute to even scores.

Rattled by the Plateau United’s goal, MFM dug deep to put their opponents on their toes as playmaker Onuwa Chukwuka kept producing splitting passes for Sikiru Olatunbosun and Stephen Odey to make runs.

The strategy coupled with the dribble runs and pace of the MFM attackers put the Plateau defence line to question and MFM found answer in the 87th minute when Onuwa’s pass put Sikiru Olatunbosun through on goal but he was brought down as he collected and made to shoot. The referee awarded a penalty afterwards.

Odey stepped forward to execute the resulting penalty which he struck hard to the right angle of the net sending Gaadi the wrong way to produce the winner.

MFM head coach, Fidelis Ilechukwu, while hailing his boys for their determination to fight to finish however praised Plateau United as a very good team.

“We have a good team and we fought to the last to earn maximum points but Plateau United showed they are a good team with a good coach and they deserve to be where they are,” Ilechukwu said.

He however assured that MFM remain solid and determined to make their mark this season.

“MFM has only two options this season. To win the league title or and to get a ticket to the continent at the end of the season. We are a good team.”