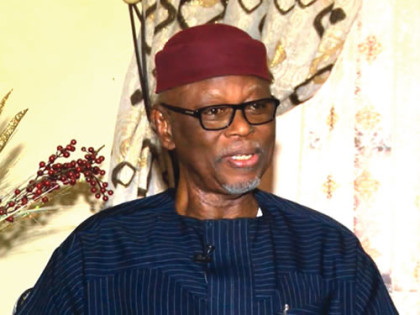 The Peoples Republic of China Ambassador to Nigeria, H.E. Zhou Pingjian has met with the National Chairman of the All Progressives Congress (APC), Chief John Odigie-Oyegun, requesting the Party’s support in ensuring Nigeria’s ‘full execution’ of the One China policy between both countries.

Pingjian was accompanied by the Chinese Deputy Ambassador, Jing Lin and Political Officer, Peng Chen on the courtesy visit on the APC National Chairman.

The Chinese Ambassador briefed the APC National Chairman and members of the APC National Working Committee (NWC) present on China’s domestic politics and China-Nigeria strategic bilateral relations. He also explored areas of cooperation and collaboration between the governing parties of both countries – the APC and the Communist Party of China (CPC).

Pingjian disclosed that China has pledged and almost approved $5billion to support infrastructure projects in Nigeria.

“This year is a big one for party politics in China. Every five years, we hold party conventions were we draw a new blueprint for the years ahead. That means major policy decisions will be made at the National Congress of the Communist Party of China. A new Central Committee will be elected at the congress. The central committee will in turn elect the new central leadership.” Pingjian disclosed.

Pingjian recalled that a United Nations 1971 resolution ensured the Communist Peoples Republic of China (mainland China) assumed the Republic of China’s (Taiwan) place in the General Assembly as well as its place as one of the five permanent members of the U.N. Security Council.

The Chinese Ambassador said: “China and Nigeria has been very good friends since 1971. That year we set up diplomatic relations and that year, Nigeria was one of the twenty-three countries who supported the United Nations General Assembly’s vote to admit the People’s Republic of China.

“Unfortunately, in 1999, Nigeria’s ministry of commerce signed a Memorandum of Understanding with Taiwan which led to the setting up of a Trade mission of the Republic of China (Taiwan) in Nigeria. That is two Chinas. For years, we have kept the pressure on Nigeria. Last year President Muhammadu Buhari was in Beijing for a state visit and the Chinese President, raised the issue. Upon resumption to Nigeria, President Buhari sent out directives to the Ministry of Affairs to honour and implement Nigeria’s One China policy.

“Nigeria’s policy is one China but unfortunately, it has not been fully executed. The Mission contravenes the Policy of One China… What we are asking the ministry of foreign affairs to do is to fully implement, execute the One China policy… We are requesting a change of name from the Trade Mission of the Republic of China (Taiwan) to Taipei Trade Agency, Lagos. We are not sure that has been done or not. We are also requesting the relocation of the Mission to Lagos, because Abuja is the political capital of Nigeria.

“We take the message very seriously and we will take it up. We must not let these issues stand in the way of very important and critical relationship between Nigeria and China.” The APC National Chairman said.