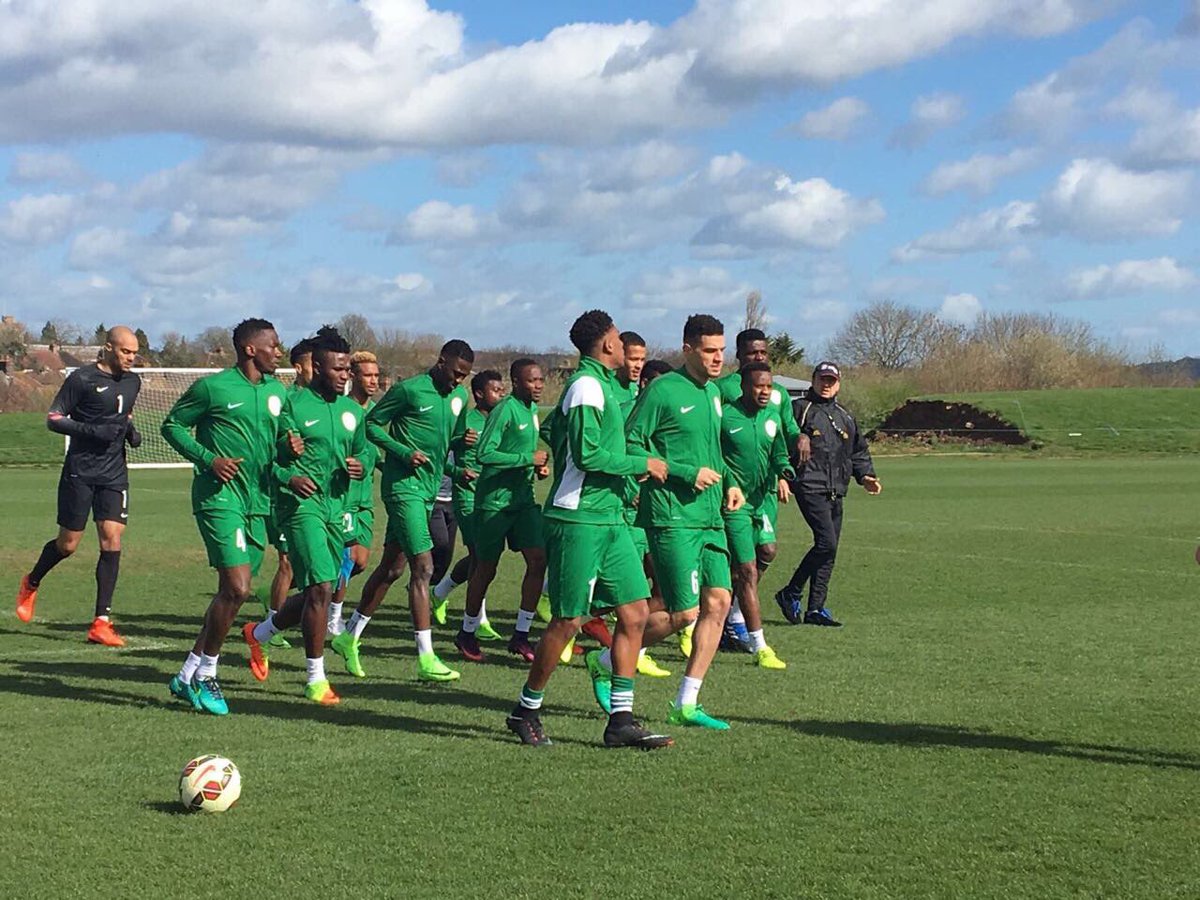 Ahead of their  two international friendlies against Senegal and Burkina Faso in London, Super Eagles, had their first training session on Tuesday at The Hive training ground of Barnet FC.

According to Supersport, the players were put through their paces in various light work by the technical crew led by Gernot Rohr.

At a ridiculously cold weather for this time of the year the 16 players in camp as at the time of the training were full of banter and laughter.

Carl Ikeme is the only goalkeeper at this point while new invitees Tyrone Ebuehi, Chidozie Awaziem and Noah Joel Sarenren Bazee looked to be integrating very well.

The Super Eagles’ Hotel Crowne Plaza Ealing in London has been very much alive since Monday following the arrival of 17 of the 25 players invited for two top –drawer friendlies on Thursday and next Monday.

English Premiership giants Chelsea FC’s big force, Victor Moses has been excused from the camp after showing a report from the Blues’ medical team that stated he was being treated for injury. Eagles’ medical doctor Ibrahim Gyaran promptly told the technical crew to allow Moses to go back and continue treatment in south –west London.

With injury to Victor Moses, only 24 players will now prosecute both matches.

Three –time African champions Nigeria take on 2002 FIFA World Cup quarter finalists Senegal at The Hive, home ground of Barnet Football Club on Thursday, 23rd March by 8pm, and will be up against 201

The Nigeria Football Federation and its FIFA Match Agent, Jairo Pachon of Eurodata Sport arranged both matches as preparation for the Super Eagles for the 2019 Africa Cup of Nations qualifying series starting in June, as well as the remaining matches of the 2018 FIFA World Cup qualifying race.

In what is termed has a team spirit initiation, the National team initiated its new members in a dance performance to welcome them into the Super Eagles.

John Ogu tweeted some of the videos in which Tyrone Ebuehi, Noah Bazee, Isaac Success and Kayode Olarenwaju gave us their best dance steps.

Kayode Olarenwaju gave us his own too. National team Initiation. Welcome to Super Eagles !!! pic.twitter.com/f7zuBhrRzK

And here you go,Success gave us his too!! National team Initiation . Welcome to the Super Eagles 🇳🇬🇳🇬 pic.twitter.com/jhhK3ntR2R