The Minister, who commissioned these buses on Friday at the FCTA Staff Car Park in the Central Business District, said that they are the first tranche of the FCTA Staff Bus Scheme. 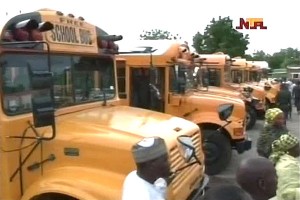 Malam Bello stated that at the early stage of his Administration, the Scheme was conceived as a palliative to cushion the effect of economic hardship and difficulty in vehicular transportation of members of staff to and from the office.

He reiterated that the FCTA Staff Bus Scheme is very important to his Administration because the welfare of staff remains topmost for increased productivity and quality service delivery to the residents of the Territory.

The Minister recalled that that a Committee headed by the Director of Establishment and Training was constituted to work out modality for a short and long term strategy on the operation of Staff Bus Scheme.

He explained that the initial number in the Staff Bus Scheme comprise of 25 large capacity buses which monetary value would be deducted as part of liquidation of the FCTA loans to the Abuja Urban Mass Transport Company (AUMTCO).

According to him, the FCT Administration intends to boost the operation of the Scheme and to make it more vibrant, by collaborating with development partners in getting more buses as part of their Corporate Social Responsibility (CSR) to expand the scope of its operation to cover staff of other Federal Ministries, Departments and Agencies (MDAs) across the Federal Capital Territory.

The Minister announced that members of staff would be conveyed on subsidized fares from all the routes within the Federal Capital Territory including Keffi in Nasarawa State and Suleja in Niger State to reduce the cost and stress being faced by staff.

Malam Bello however, called for regular maintenance to ensure that the vehicles last long; adding, “high maintenance culture remains the watchword of the current FCT Administration”.

He paid tribute to the FCT Permanent Secretary, Dr. Babatope Ajakaiye and the FCT Department of Establishment and Training that worked very hard to make the programme a reality.

Welcoming guests to the occasion, the FCT Director of Establishment & Training, Salihu Hawat Mohammed remarked that the commissioning of these buses has demonstrated the unwavering commitment of the FCT Administration to the welfare of the members of staff.

According to him, the scheme has also added to the Minister’s achievements in promoting industrial harmony by ensuring regular payments of salaries to staff even at the critical time of recession.

He emphasised that the scheme would boost the morale of the staff and reduce stress of their transportation needs, to and from their respective offices.

The FCT Permanent Secretary, Dr. Babatope Ajakaiye and other senior officials of the FCT Administration also attended the commissioning ceremony.