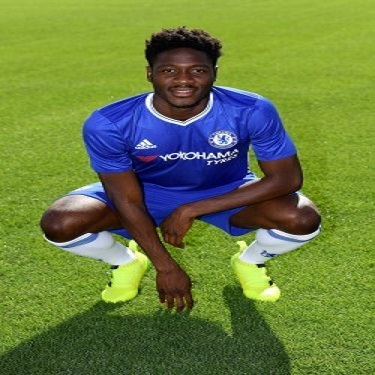 Chelsea youngster, Ola Aina is said to be in talks with Super Eagles handlers to play for the country of his parents’ birth, Nigeria. The youngster is wanted by Nigeria coach Gernot Rohr as he considers his international future with England.

Aina, with his family watched the Nigeria vs Senegal match which ended 1-1 at Barnet FC’s The Hive Stadium in London. The lad was seen cheering on Nigeria, as Manchester City’s Kelechi Iheanacho equalised, after an earlier Moussa Sow strike put Senegal ahead.

The 20-year-old was born in London and has made dozens of appearances for England at youth level, but a lack of appearances at Chelsea is hindering his chances of further progress.

According to Goal, Aina has left himself out of the picture for England’s Under-21s team while he makes a decision on who to represent at international level.

Although a definitive decision has yet to be made by him, talks have been ongoing between Nigeria and the player for months.

The Super Eagles’ head coach Rohr was asked to clarify his intentions concerning Aina after his side’s 1-1 draw with Senegal on Thursday.

“It is normal to have this situation, when we have very good player [like Ola Aina] who can pick two teams,” Rohr said in response to Goal. “We always leave the door open to young talent.”

Goal also reported that Ex-Chelsea midfielder John Obi Mikel admitted back in October that he has been trying to convince him to swap England for Nigeria as the pair trained together on the fringes of Antonio Conte’s first-team squad.

Aina signed for Chelsea as an under-11 and made his youth team debut as a schoolboy in the 2012–13 season and went on to start in both legs of the semi-final and final of the FA Youth Cup.

The full right-back signed a new four-year contract on 6 July 2016, ending the rumors of him leaving the London side. After signing a new contract, Aina was included in the traveling squad to Austria and the United States.

Aina was given his professional debut by manager Antonio Conte in a 3–2 victory over Bristol Rovers in the EFL Cup on the 23rd of August 2016.