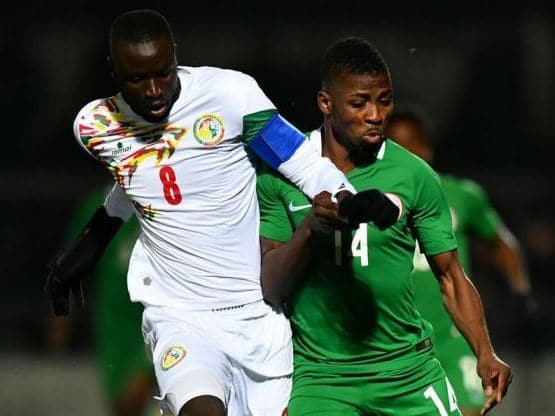 Senegal the 2017 Africa Cup of Nations quarter finalists started hard and fast, hoping to browbeat Nigeria and get an early goal, but they encountered a Super Eagles team that did not succumb to be intimidated and was ready to give as much as it received on the night.

The teams played out a pulsating 1-1 draw showcasing a brilliant advertisement of Africa’s football at The Hive Barnet in London.

25mins into the match Onazi looked injured and was stretchered off the pitch. He’s replaced with John Ogu. Pray this is not something serious this is not so serious.

Akpeyi had to stretch full length to stop a fierce drive by Ndoye. Just before recess, Iheanacho missed narrowly at the end of a clever move by Iwobi and Moses Simon.

Teranger Lions started the second half with vigor and determination, winning a number of free kicks in the Eagles area.

It paid off in the 54th minute, when Moussa Sow profited from a poor punch of the ball by Akpeyi to blast the Lions into the lead.

Moments later Nigeria goalkeeper was called to duty again when he had to palm away another fierce shot from the rampaging Lions, and Nguette came close again in the 58th minute. 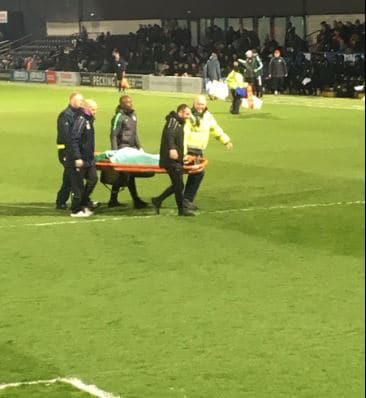 New call-up Olanrewaju, who came in for Ahmed Musa burst into space to gain possession for Nigeria from the Senegalese, and pass it to Iheanacho, who drove past his marker but was brought down by Diallo in the box.

The Manchester City forward picked himself up and slot home a low drive to send the Senegalese goalkeeper the wrong way for Super Eagles equalizer from the spot. 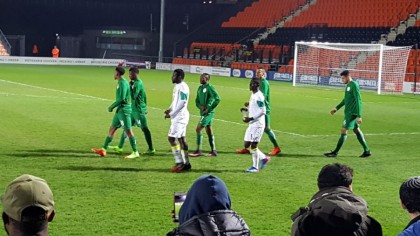 The NFF report the Eagles took control of the game immediately afterwards, and could have won the game two minutes into added time when man of the match the nimble –footed Ndidi cleverly won the ball on the left wing and found Man City’s Iheanacho, whose shot went narrowly wide away from goal.

Monday, the Super Eagles, unbeaten since losing a Cup of Nations qualifying match to Egypt in Alexandria on 29th March 2016, will take on Burkina Faso’s Etalons at the same venue.