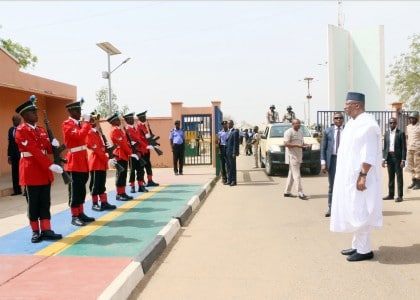 EHISIENMEN OSAIGBOVO, Abuja; Dambazau has implored cadets at the Police Academy Kano (POLAC), to take advantage of the opportunities available at POLAC, to develop themselves into intelligent and efficient Police Officers capable of providing effective and efficient Policing to the nation.

Gen Dambazau gave this advice during the matriculation ceremony of 182 Cadets of the Fourth Regular course at the Academy in Wudil, Kano.

He used the occasion to reiterate the determination of President Muhammadu Buhari’s led administration to reform the Nigeria Police, while noting also, that the cardinal policy of the current administration is centered around Security, fighting corruption, and the creation of avenues for gainful employment, to enable Nigeria’s youth utilize their enormous potentials in nation building.

The Interior Minister therefore urged the Commandant of the Academy, the Coordinator, and other Principal Officers to contribute meaningfully towards the advancement of the Academy, being the first of its kind in Sub- Sahara Africa. Similarly, the Minister asked the Inspector General of Police to ensure that the Academy turns out professionally equipped Officers that will be at par with their counterparts globally. He reassures of government commitments to support accomplishment of the School’s vision to be a model security training institution that is internationally respected for excellence and untainted academic standard, noting that efficient Policing is a sine qua non for economic growth.

A breakdown by the Commandant of POLAC, AIG Aminchi S. Baraya , showed that 9 Cadets were admitted into the Faculty of Humanity, 39 in the Faculty of Law, while Social/Managerial Sciences and Faculty of Science admitted 52 and 82 Cadets respectively.

In a related development the Minister embarked on tour of facilities as well as ongoing projects in the Academy. While expressing gratitude to the Federal Government, the CBN as well as Tertiary Education Funds for their huge supports to POLAC, he however frowned at the attitude of some underperforming contractors, and directed them to ensure that their job is completed, ahead of the forth coming accreditation visit by the National University Commission  (NUC).