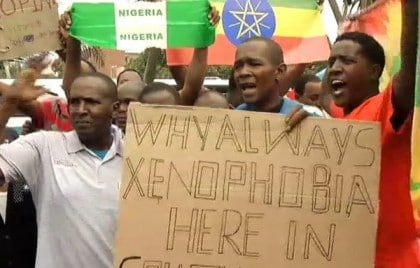 NAN, Abuja; The Nigerian Mission in South Africa says it is on top of the latest xenophobic attacks on Nigerians in Polokwane, Limpopo Province.

Amb. Martin Cobham, Nigerian High Commissioner in South Africa, told the News Agency of Nigeria (NAN) in Abuja on Monday that the mission had visited the affected area and met with all stakeholders.

Cobham said a senior staff of the high commission travelled to Polokwane with national officers of the Nigeria Union in South Africa, following the recent attacks against Nigerians in the Province.

“Following the reported attack on Nigerians in Polokwane, Limpopo Province, I sent an officer to the area. He held meetings with the local taxi drivers, Nigeria Union and the police.

“The aim is to resolve issues and ensure cordial relationship between Nigerians and South Africans,’’ he said.

Cobham said the meeting set up a committee comprising the Nigerian community, South African police and taxi drivers to identify trouble makers and hand them over to the police.

“Nigerians in that community volunteered to point out trouble makers and hand them over to the police and with that intervention, peace has returned to Polokwane.

“The committee is to report to the mission periodically, while the mission will take the report to the main body, the Early Warning Unit, set up by the Nigerian Foreign Affairs minister and his South African counterpart,’’ he said.

Cobham also said “ the mission is on top of the situation and we assure our people that with the early warning unit in place, a lot will be achieved in this regard’’.

He said that though no Nigerian died, two were seriously injured and were still in hospital.

“We had a meeting with the Nigerian community in the city and told them to be law abiding because the South African Police assured us that they are in charge and will not tolerate lawlessness,’’ he said. (NAN)

NEWER POSTMedia is a Significant Part of the Reforms Being Carried Out by the B.P.E.- Acting DG Dr .V. Akpotaire
OLDER POSTMines and Steel Development: Fed Gov’t Sanctions 313 Mining Companies