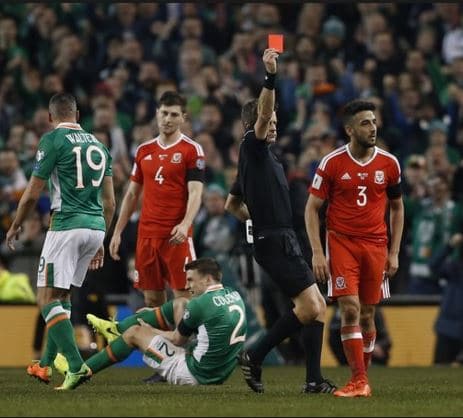 FIFA has opened proceedings against Wales full-back Neil Taylor after his leg-breaking challenge on Republic of Ireland’s Seamus Coleman.

The Everton right-back and the captain of the Republic of Ireland was taken off on a stretcher after the tackle which saw Taylor sent off during last Friday’s World Cup qualifier in Dublin.

Coleman has been a senior international for the Republic of Ireland since 2011, acquiring over 40 caps. He won the 2011 Nations Cup and was awarded the FAI Under-21 International Player of the Year in both 2009 and 2010.

The 28-year-old Coleman will require surgery on a double break.

Taylor will be suspended for the qualifier in Serbia in June, but could have his one-game ban extended by FIFA. 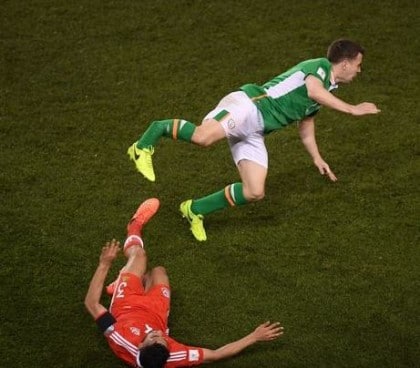 Wales captain Ashley Williams recently revealed that Taylor wanted to visit Coleman in hospital, and sent him a text message from the Aviva Stadium.

“Neil was gutted. He was sitting on the floor virtually in tears,” he told the Everton FC website.

“Even people who don’t know Seamus like I do were gutted.

“He asked me to check if it would be OK to go to see Seamus in hospital. He got his number off me and sent him a text straight away. 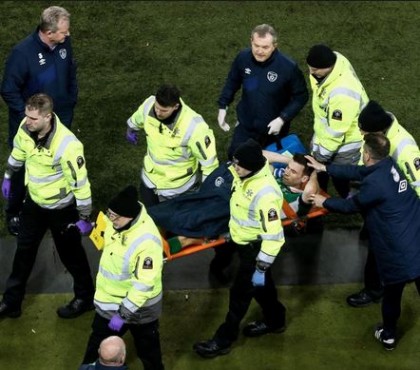 “When I found out it was a broken leg it made me feel sick inside because it’s someone who I like so much and is one of my mates.”

Taylor made his full international debut for Wales in 2010, and has since earned over 30 caps. He was part of their squad which reached the semi-finals at UEFA Euro 2016.

After his position as Swansea’s left back was challenged by Stephen Kingsley and Martin Olsson, on 31 January 2017 Taylor joined Championship side Aston Villa along with an estimated £5 million in exchange for Jordan Ayew.