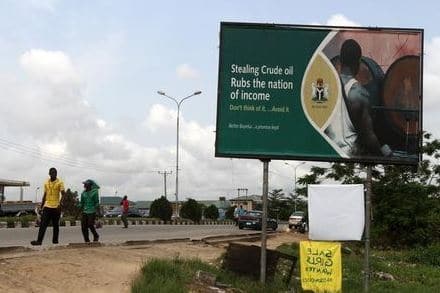 The Federal Road Safety Corps (FRSC) has raised concerns about wrong placement of advertising billboards and posters in the Federal Capital Territory (FCT).

The FCT Sector Commander of the corps, Mr Sunday Oghenekaro, told the News Agency of Nigeria (NAN) in Abuja that some of the billboards and posters were blocking road traffic signs and warnings.

Others, according to oghenekaro, are placed on the railings of pedestrian and flyover bridges thereby providing cover for criminals to attack innocent citizens on such bridges.

“ What we have found is that some of the billboards placed by these outdoor advertisers do not take road users’ interest into consideration.

“ In some places, the billboards are mounted where they have completely blocked road signs and traffic warning to motorists.

“If you go round from Dei Dei up till AYA, almost all the bridges have one billboard or the other.

“Miscreants could just wait on top of the bridge knowing that they cannot be seen from the ground by anybody and cause mayhem on lawful motorists and pedestrians on the bridges,’’ he said.

He also said that some electronic billboards were so bright that they obscured the vision of motorists at night.

The sector commander also drew attention to the integrity of materials used for some of the giant roadside billboards.

According to him, some of the billboards are mounted on weak poles and pillars that could easily give way as a result of continuous wind pressure, and fall on passersby.

The sector commander said he had met with executives of the Outdoor Advertising Association of Nigeria (OOAN) and the officials of the FCT administration on the issue on Monday, and that they promised to address the matter.

The General Secretary of OOAN, Mr Femi Ogala, confirmed the meeting, saying that the association was already taking steps to correct the anomaly.

Ogala, however, pointed out that those involved in the act were fake outdoor advertisers who were not members of OOAN.

“ They are not even registered advertising practitioners, but because they have contacts here and there, they are given approvals.

“All our members have been informed about the issue raised by the sector commander, and the man is also coming to speak to us,’’ Ogala said.

He added that the association had invited him to its next quarterly meeting in May to sensistise its members on the issue.

When contacted, Mr Ibrahim Yusuf, the Director of Outdoor Advertising in the Federal Capital Territory Administration (FCTA), said his department had drawn the attention of OOAN to the issue before now.

Yusuf said the department had not been able to properly enforce appropriate standards before now due to funding constraints.

`Before we give the approval we concur with the Engineering Department on the size of the boards they are supposed to hang on either pedestrian or flyover bridges.

“Some complied; some did not comply, typical Nigeria kind of attitude. The issue is that of having resources to do the proper enforcement from our side.

“But now we are going to ensure enforcement and compliance with the standards that we gave them,” the director said.