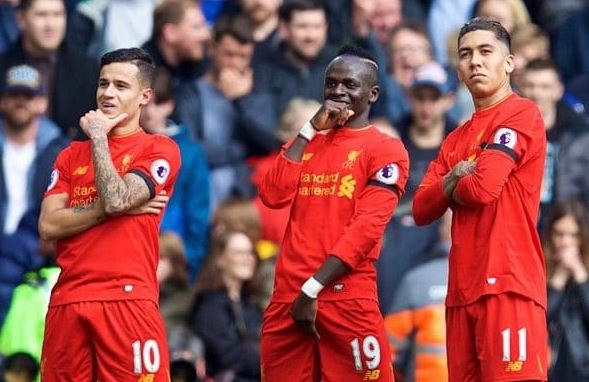 Liverpool enhanced their prospects of a top-four place by beating derby rivals Everton 3-1 on Saturday at Anfield.

It was however a defeat which severely damaged Everton’s hopes of breaking into the battle for a UEFA Champions League qualification spot.

Sadio Mane gave the hosts an early lead when he played a one-two with Roberto Firmino and finished off an angled run with a shot into the far corner.

A Philippe Coutinho shot was palmed up by Toffees keeper Joel Robles and headed off the line by Phil Jagielka before the visitors equalised.

Jagielka flicked on a corner kick at the near post and, after Ashley Williams got a touch, Matthew Pennington arrived to slot in.

Pennington got his first Everton goal on his first appearance of the season.

However, the situation lasted just two minutes and 57 seconds before Coutinho beat two players and curled a shot into the top corner.

He then set up substitute Divock Origi — on for the injured Mane — to power in Liverpool’s third.

The result put the Reds seven points clear of fifth-placed Manchester United —- who have three games in hand, including at home against West Brom later on Saturday.

Everton are seven points off the top four having played more matches than their rivals.