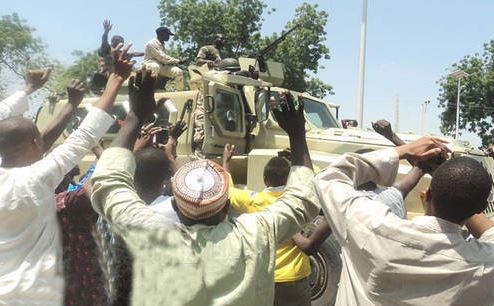 The people of Kamwe of Michika in Adamawa on Sunday marked their cultural day in celebration of the defeat of Boko Haram and  return of peace to the area recaptured from the insurgents.

The cultural day celebration is the first since the liberation of the area from Boko Haram insurgents two years ago.

Speaking at the occasion, former governor of Adamawa who hails from the area,  Mr Boni Haruna, expressed gratitude to God for giving victory to security forces in the fight against insurgents.

Haruna who was represented by Mr Salisu Gogura, called for unity among the people for lasting peace and smooth building and rehabilitation process ongoing in the area.

He noted that as industrious people, the Kamwe’s must not allow religion, politics and other sentiments to divide them at this critical moment.

Also speaking on unity, the Catholic Bishop of Yola Diocese, Bishop Dami Mamza, tasked politicians in the area to ensure unity instead of division.

“Politicians are our problem; they need to change their ways if we are to unite and speak with one voice,” Mamza said.

Highlights of the celebration included traditional dances and the presentation of a book titled, “Kamwe People of Northern Nigeria :Origin, History and Culture ” written  by a London based son of the area, Mr  Iliya  Kwache.

It can recalled that in 2014, residents said that insurgents captured the key north-eastern town of Michika.

The Defence Headquarters on the 31st of January 2015 said following extensive mop-up operations, Nigerian troops sacked Boko Haram terrorists from Michika, one of the remaining two local government areas in Adamawa under the control of the Boko Haram terrorist group.