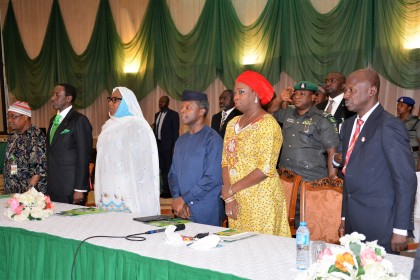 The Vice President of Nigeria, Prof. Yemi Osinbajo, has charged the elite in the country to rise up to the challenge of changing the “narrative” of corruption, stressing that the level of corruption in the country was intolerable.
He made the charge at the end of a four-day introduction programme, organised by the Ministry of Finance, for 44 non-career ambassadors-designate, which came to an end on April 4, 2017. Also Read; Vice President Yemi Osinbajo at OECD Forum

“Corruption is an existential issue that will affect whether our country survives, and we must go beyond talking about it, to acting,” he said.

Osinbajo, while urging the ambassadors-designate, to see themselves as worthy representatives of the country, reminded them that the current administration has focused on revamping the economy, ensuring security for all and fighting corruption.
“We are honoured to be served by such distinguished individuals like yourself, and we’re proud to have you represent us,” he said.
Assuring the ambassadors-designate that, “there’s great hope for our economy and a turnaround is in sight”, he further urged them to ensure that “people who come to the embassies must be treated with respect”.
“I do not know any other country that has as much resources like Nigeria including men, women and naturals resource, endowments, we’re tremendously blessed,” he said. Also Read;OECD: Osinbajo Requests The Return of Nigeria’s Stolen Assets From the WestEarlier, Ibrahim Magu, the acting Chairman of the Economic and Financial Crimes Commission, EFCC, while delivering a paper titled, “Anti-Corruption Agenda and the Recovery of Illicit Financial Assets from abroad: The Role of Nigerian Missions”, enjoined the new representatives of the country, to see themselves as partners in the war against corruption.
“We are making you our ambassadors to fight corruption wherever you go, because we alone at the EFCC cannot do the job without your support,” he said.

Stressing the adverse effects that corruption, particularly illicit transfer of funds from the country has had on the development of the country, Magu, noted that “corruption flourishes when good people fail to confront it”.
According to him, Nigeria accounts for the highest percentage of illicit flows among other African countries, which was put at about 68.1 per cent. He revealed that such was usually carried out through corrupt practices, tax evasion and illegal transfers by multi-nationals.

“You will be involved in tracing and recovery of our stolen assets and facilitating the repatriation of those funds and the perpetrators, because this is very key to your role,” he said.
He reiterated the zero-tolerance stance of the President Muhammadu Buhari-led administration, as regards corruption, urging them to “key into our mission of ridding Nigeria of corruption, as this will be your greatest service to Nigeria”.

“We have posted some of our operators to these foreign missions, and we will need you to work with us,” he said, noting that the progress made in the fight against corruption must be sustained.
He further added that the EFCC currently had collaboration with agencies like the Federal Bureau of Investigations, FBI, the United Kingdom Metropolitan Police, and the Department of Justice, among other international law enforcement agencies. The relationships, which according to him have aided the war against corruption in foreign jurisdictions, must be sustained, he stressed.

The event, which was held at the Old Banquet Hall of the Presidential Villa, also witnessed presentations by Audu Ogbeh, Minister for Agriculture; Kayode Fayemi, Minister for Solid Minerals; Maj Gen. M.B. Monguno (retd), National Security Adviser, and Abike Dabiri-Erewa, Senior Special Assistant to the President on Foreign Affairs and Diaspora. It was chaired by Khadija Abba Ibrahim, Minister of State for Foreign Affairs.