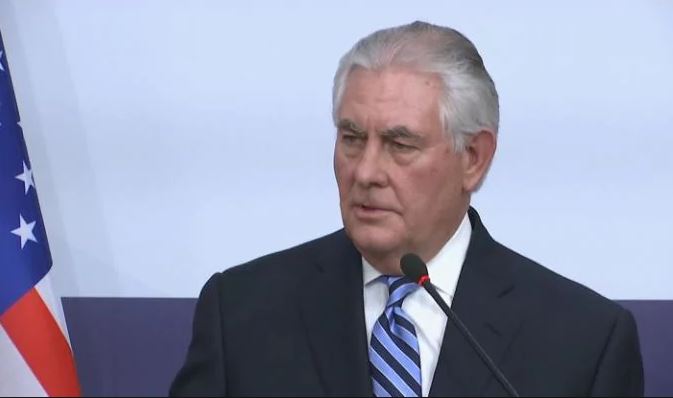 The U.S. has  issued what seemed to be its “last warning” to North Korea over its continued launch of ballistic missiles that threaten the country and its allies-Japan and South Korea.

The U.S. Secretary of State, Rex Tillerson, in a statement on Tuesday, said the U.S. had spoken enough about North Korea and would speak no further on the issue.

“The United States has spoken enough about North Korea.

“We have no further comment,” Tillerson said in the statement.

President Donald Trump had warned on Sunday in an interview with Financial Times that he could take unilateral action to eliminate North Korea’s nuclear threat.

“China has great influence over North Korea. And China will either decide to help us with North Korea, or they won’t.

“If China is not going to solve North Korea, we will,” Trump warned.

Trump had also said that North Korea was “behaving very badly” and accused China of doing little to resolve the crisis over the North’s weapons programme.

“They have been ‘playing’ the United States for years,” he said referring to North Korea.

“China has done little to help!” Trump said in a recent tweet.

The comments by the president came weeks after Tillerson had also declared during a visit to Asia that the U.S. policy of “strategic patience has ended.’’

Tillerson said that the U.S. would not rule out any option in response to provocations by North Korea.

“We are exploring a new range of security and diplomatic measures. All options are on the table.

“Certainly, we do not want for things to get to a military conflict.

“If they elevate the threat of their weapons programme  to a level that we believe requires action, that option is on the table,” Tillerson had said.

North Korea in March had fired four ballistic missiles into the sea off northwest of Japan, which appeared to be a promised retaliation over U.S.-South Korea military drills.