The National Bureau of Statistics (NBS) has said that a total of 15,232, 597 passengers travelled through Nigeria’s airports in 2016.

The NBS which disclosed this figure in a report on “Fourth Quarter 2016 and Full Year 2016 Air Transportation Data’’ released in Abuja, stated that 72 per cent were domestic passengers.

The report stated that 72 per cent were domestic passengers, travelling within Nigeria, and the remaining 28 per cent were international, entering or leaving Nigeria.

“Between 2015 and 2016 the number of passengers recorded by the Federal Aviation Authority of Nigeria (FAAN) has increased by 6.3 per cent.

“However, since the publication of the last report, FAAN has included data on passengers travelling through more airports, including Bauchi, Eket, Gombe and Uyo.

“Excluding these from the comparison with 2015, reveals that between these two years, total passenger traffic increased by 1.6 per cent for those airports included in both years,” NBS said.

The report stated that in both the third and final quarters of 2016, there was a quarterly decline in the number of passengers travelling through Nigerian airports.

“This contrasts with both 2015, in which the number of passengers increased slightly between the third and fourth quarters.

“These totals hide differing trends in the total number of domestic and international passengers.

In the last quarter, the report stated that the number of passengers fell again by 1.6 per cent to reach 2,637,975.

It stated that there was a large spike in international passengers in the third quarter.

It, however, stated that due to the small number of international passengers relative to domestic passengers, the latter had a larger impact on total movements in passenger numbers in the third quarter.

“In the fourth quarter this reversed, with the drop in international passenger numbers contributing 4.5 per cent points of the 5.6 per cent drop in total passengers, or roughly 80 per cent.

According to the report, throughout 2016, the performance of the different parts of the Nigerian Aviation sector varied.

It stated that there were large increases in the volume of both cargo and mail, especially in the final quarter.

“By contrast, most airports recorded a decline in the number of aircrafts to land and depart.

“Output in the Air Transport Sector, as well as its contribution to Gross Domestic Product (GDP), declined in 2016.

“During the year, several airlines had operational issues, and either cut back on services provided, or stopped operations entirely.’’ 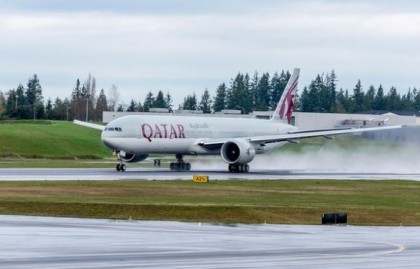 The further report stated that in real terms, the output in the sector declined by 4.9 per cent between 2015 and 2016, with the largest year on year fall recorded in the final quarter, of 13.3 per cent.

“However, despite the recession which may have been expected to reduce demand for travel, the number of passengers using most airports increased.

“The fall in output was likely to be more of a reflection of increased costs of operations, rather than decreased demand,’’ it stated.