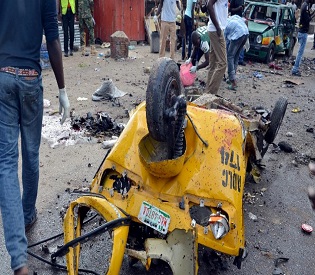 Abdulkadir Ibrahim, Maiduguri: At about 0520hrs, today, two female suicide bombers with IED strapped to their bodies attempted to enter a mosque at Juddumuri village, after federal high court.

The two female suicide bombers were intercepted and prevented by the moslem worshippers. In the process, one of them detonated her vest, killing both of them and injuring five others.

The injured were rushed to specialist hospital, while the remains of the suicide bombers were equally evacuated by SEMA. From Dsp Isuku Victor PPRO Borno.

The second sound was the blast from the unexploded IED from the second explosion, which was detonated my the command’s EOD team at the scene.

Following an explosion around a mosque close to Federal high court Jiddari polo emergency response teams have evacuated the bodies of 2 female bombers believed to have died in the incident. Four other persons with injuries were administered with first aid and transported to the hospitals.