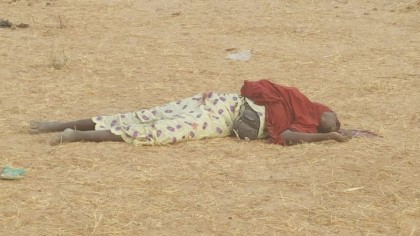 One Of The Female Suicide Bombers Killed

Two female suicide bombers who attempted to enter a mosque in Juddumuri village near Maiduguri during early morning prayers but intercepted died when one of the bombers detonated her improvised explosive device strapped to her body.

Four people who were injured are receiving treatment at the specialist hospital Maiduguri.

The remains of the suicide bombers have been evacuated.

To boost government effort at remodeling agriculture in Plateau State, Governor Simon Lalong says government has placed an order for twenty metric tons of fertilizer for the 2017 faring season under the Federal Government intervention programme.

He made this known at the Plateau State Agricultural Summit held in Jos.

Buhari Felicitates with Aliko Dangote At 60

President Buhari joins the business world, Dangote’s friends and family in congratulating Forbes’ rated richest African and black man for his patriotism and kind heartedness in always making sacrifices to promote the good of the society as exemplified by his intervention in Polio and Ebola.

Enhanced civil military relation is vital to the success of the ongoing internal security operations of the Nigerian Army.

The chief of army staff Lt. Gen. Tukur Buratai said this while inaugurating an army medical outpost in Riyom Lga of Plateau State.

The medical facility located in Tigi, a village bordering Southern Kaduna and Plateau State, the Army Chief said, is part of the Nigerian Army social responsibilities and it is aimed at serving troops on operation save heaven and the neighboring communities.

Commending W.H.O, UNICEF and EU, Lt. Gen. Buratai appealed to the people of the area to live in peace and to view the medical outpost as a unifying factor.

A former Presidential Adviser and PDP Stalwart, Senator Florence Ita Giwa has formerly declared for the All Progressives Congress, APC.

Senator Ita Giwa who joins the party with several of her supporters in Bakasi Local Government Area of Cross River State said APC is the platform to contribute to national development.

The people of Bakasi say the event marks a turning point for them as they are optimistic that their resettlement will receive better attention by the government.

More than seventy eight thousand candidates participated in the 2017 Common Entrance Examination into the one hundred and four unity colleges across the federation.

The Federal Government says it will sustain various empowerment programme targeted at the Niger Delta youth to be gainfully employed and be employers of labour in order to make them productive and reduce restiveness and insecurity in the region.

Minister of State for Niger Delta Affairs, Prof. Claudius Daramola said this during the graduation ceremony of the training and empowerment programme on ICT, entrepreneurship and e-business, held in Ibadan.

Chairman of the Independent National Electoral Commission, INEC, Prof. Mahmood Yakubu has reiterated that the decision to announce the dates of the 2019 election is to facilitate planning.

Speaking to correspondent, Wilfred Ewaleifoh on the sidelines of the International Conference on Electoral Process held in Cotonou, Prof. Yakubu explained that this is in line with the practice in other democracies.

The INEC Chairman also spoke on the lack of trust in the electoral system, which has resulted in the increasing reliance on expensive technology thereby raising the cost of conducting elections.

Prof. Yakubu also says that INEC is addressing issues of delimitation and ICT among others in liaison with the national assembly.

More sympathizers have continued to condole with the family of late broadcast icon Dr. Patrick Ityohegh who passed on Wednesday April 5th at a private hospital in Makurdi, the Benue State Capital.

Among them was a team of management staff of the Nigerian Television Authority NTA Headquarters Abuja.

The team delivered a condolence letter to the family on behalf of the Director General Mallam Yakubu Ibn Muhammed.

Pope Francis has decried war terrorism and weapons as he condemns Egypt blast.

This was during a mass where the pontiff blessed palm fronts and olive branches in St Peters Square at the start of holy week celebrations.

The Federal Government has reaffirmed its unwavering commitment to finding solutions to Borno IDPS returning from neighboring countries.

Federal Commissioner National Commission for Refugees, Migrants and Internally Displaced Persons Sadiya Umar Farouq made this known during the distribution of relief materials at the commission’s warehouse in Maiduguri.