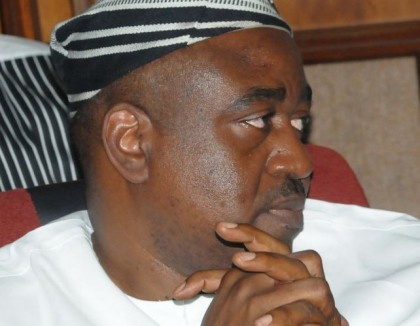 Reports say that a new date has been fixed for the arraignment.

President Muhammadu Buhari this Tuesday granted audience to the Chief Justice of Nigeria, Justice Walter Onnoghen In furtherance of his strategic consultations towards addressing the nation’s fundamental problems.

Justice Onnoghen who spoke to newsmen after the meeting restated his commitment to the fight against corruption as bane of national development.

The Nigerian Air Force is prioritizing the education of girl child as a deliberate effort to stop the use of teenage girls and women for suicide bombing.

Chief of Air Staff, Air Vice Marshal Sadique Abubakar said this when he received the executive members of the Air Force Girls Alumni Association of Nigeria in his office.

The Federal Government has condemned the recent terror on two Coptic churches in the towns of Tanta and Alexandria in Egypt which killed over 44 people.

In a press statement signed by the spokesperson, Ministry of Foreign Affairs, Dr. Clement Aduku, it says Nigeria seriously condemns such callous and cowardly acts against innocent people.

The statement further says Nigerian people stand in solidarity with the Egyptian brothers and sisters most especially families of the victims to denounce the terrorists who seek to destroy the common human values and civilization.

The ministry also condemned the dastardly terrorist bombing of St. Petersburg train in Russia, which killed 14 people and wounded more.

The ministry further said terrorist attacks have sadly become a recurring nightmare in the global community but world leaders will not relent in the combined efforts to stop the perpetrators.

FG Says No Going Back on War Against Corruption

The Federal Government has called on Nigerians Not to be discouraged by the recent setbacks in the war against corruption, promising that the serial negative outcome of corruption cases that were recorded at the high court level would not dampen the anti-graft battle.

In a statement issued by the Minister of Information and Culture, Lai Mohammed, Nigerians have been assured that the federal government has appealed against all the negative decisions, and will vigorously canvass its case at the level of the court of appeal.

The House Adhoc Committee investigating the 17 billion dollars stolen from undeclared crude oil and liquefied natural gas, from January 2011 to December, 2014 says it has established facts of infraction in the oil and gas transactions in the years under review.

The House Committee on federal territory area councils and Ancillary Matters have urged the federal capital territory development agency to expedite action in resettling the remaining indigenous communities in the satellite development area, so as to give way for even development of Abuja.

This was during its oversight functions to some sites in the FCT.

The House of Representatives has passed four bills for third reading, they include a bill for an act to establish the national transport commission.

The legislators also resolved to investigate the circumstance that led to the outbreak of epidemic that caused the death of three students at Queens College Lagos.

For alleged involvement in an over 23 billion naira bribe to influence the 2015 election, the independent national electoral commission has  placed 205 of its serving staff on suspension.

The commission has also blacklisted a non-governmental organization for its role in the bribery case.

Minister of Science and Technology on ICT Expo

Minister of Science and Technology, Dr. Ogbonnaya Onu has commended the Lagos chamber of commerce and industry for its decision to organize information and communication technology expo for the promotion of science, technology, innovation and entrepreneurship.

This was at a meeting with the leadership of specialized exhibition committee of the chambers.

The Minister of Power, Works and Housing, Babatunde Fashola at the fourteenth meeting of Power Sector Operators in Osogbo Says government remains resolute on generation companies getting paid for the services in order to have liquidity stability in the electricity market.

He said this at a national training for the officers in Abuja.

Getting the youths engaged towards contributing positively to the growth of the country remains a top priority of the Buhari Administration, and Vice President Yemi Osinbajo said government is keen on its desire to support young people especially across the Niger –Delta region to drive  creativity and entrepreneurship.

Nasarawa State Government is to commence payment of gratuities and death benefits to pensioners in the state.

Reports say that widows and widowers, the sick and aged as well as persons living with disabilities will benefit from the first batch of the disbursement.