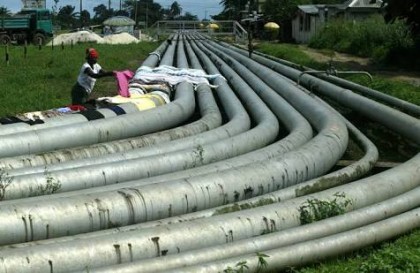 The Independent Petroleum Marketers Association of Nigeria (IPMAN) on Monday, said it had constituted a surveillance team to curb activities of vandals along the petroleum pipelines across the country.

Mr Chinedu Okoronkwo, the National President of the association, told the News Agency of Nigeria (NAN) in Lagos that pipeline vandalism was causing the nation huge losses.

He said the setting up of the team signified the readiness of IPMAN to support the Federal Government on the surveillance of petroleum pipelines.

The IPMAN boss expressed concern over incessant pipeline vandalism, especially in the South-West zone of the country.

He, however, lauded government’s initiative on incessant vandalism on pipeline network with a view to curbing the menace.

“Very soon, the menace will be stamped out. Also Read; IPMAN Flags-off Sale of Kerosene in Kano

“I urge my members to bear with government on the ongoing challenges facing loading at some depots.

“It is our collective responsibility to check and bring pipelines culprits to book,” Okoronkwo said.

Earlier, Alhaji Debo Ahmed, Chairman, Western Zone of IPMAN, had told NAN that the association would support necessary efforts to curb incessant vandalism, especially on the “system 2B” which he pumped products from Atlas Cove to five depots in the zone.

He called on the stakeholders in the oil and gas industry to form a synergy with security agencies toward tackling pipeline vandalism.

Ahmed also urged them to join hands with the government in fighting vandalism out of the system, noting that the country had suffered greatly from such menace. Also Read; IPMAN To Partner With The Police To Check Pipeline Vandalism

The zonal chairman further urged the stakeholders not to open their eyes to watch some criminal elements destroying national assets.

“It costs government billions of naira to revive the oil pipelines.

“ Members of IPMAN, Western zone, have agreed to join hands with government and other security agents to embark on 24-hour surveillance of the pipelines network.

“We believe that mutual cooperation between the association and security agencies will lead to greater success in the fight against the menace.

“There is need to intensify the fight against vandalism because it is having adverse effects on the economy and the businesses of our members,’’ Ahmed said.

Ahmed also assured that IPMAN would not rest on its oars in providing environment that would enable security personnel perform their duty effectively and reduce the impact of pipeline vandalism.

He lauded the management of Nigeria National Petroleum Corporation (NNPC) for re-opening the Ejigbo and Mosimi depots, after one year of closure due to activities of vandals.

The IPMAN zonal chairman  expressed optimism that the reopening of the two depots would ease distribution of petroleum products to South-West and put less pressure on marketers going to Apapa private depots to load. (NAN)