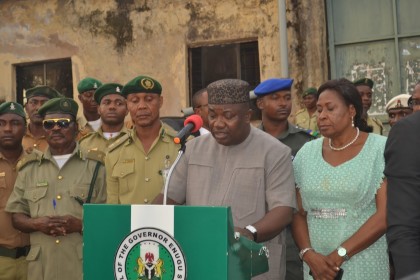 Enugu Governor, Ifeanyi Ugwuanyi on One Community One Project

The Government of Enugu State is embarking on community-driven community development projects in all the autonomous communities of the State.

This was made known by the Commissioner for Gender Affairs and Social Development, Hon. Peace Nnaji, during a meeting of Peoples Democratic Party (PDP) stakeholders at Amagunze, Nkanu East council headquarters, during the Easter holiday.

Hon. Nnaji said each community would nominate a priority N10 million community development project, which would be executed in two tranches of N5 million each.

The Commissioner said this was in line with the inclusive and people-driven development agenda of the Governor-Ifeanyi Ugwuanyi led administration.

Also speaking, the Special Adviser on Media to the Deputy President of the Senate, Mr. Uche Anichukwu, commended Governor Ifeanyi Ugwaunyi for his equitable and bottom-top approach to governance.

Mr. Anichukwu also appreciated the government of State Enugu State for the planned rural electrification project in Nomeh Unataeze community, noting that democracy could only endure and inspire confidence in the minds of the people if it delivered on the promise of better life for the people.

Member representing Nkanu East State Constituency at the Enugu State House of Assembly, Hon. Paul Nnajiofor; Chairman of the Nkanu East Council, Hon. Ikechukwu Ubagu, and Chairman of Nkanu East PDP, Prince Emeka Nnaji, called on the people to continue in their support for the Ugwuanyi-led administration to actualise its numerous development projects in the LGA in particular and the State in general.